It's your friendly neighborhood Peace Corps Volunteer, Kate.  In answer to your question, Mom, I own this blog!  At least for today.

Ever since Mom asked me to do a guest post, I've been trying to think of what to write.  I don't really want to write about Jordan, because I get enough of that in my daily life (ha!).  So I decided to write about when Hannah was born.  I'm sure this story has been on the blog at least once before, but not from my perspective! 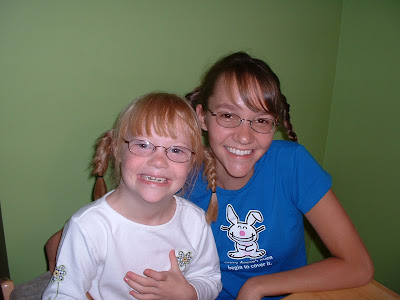 When Hannah was born, I was 9 1/2.  I was so excited when Mom told us she was pregnant, and argued with my brother for months about whether it would be a girl or boy (I won! He was so upset at the ultrasound...).  He also wanted to name her Guinevere.  Glad that got sorted out.

When Mom went into labor on March 12th, I stayed up with Dad timing the contractions, until we got shipped off to a friend's house for the night.  Hannah was born at 12:51 AM on March 13th!  The next day, we went to the hospital with my grandparents.  I was pretty surprised--I hadn't seen a newborn baby before, so I had an image in my head that they came out all chubby and beautiful.  Not the case.  She was little, wrinkled, and red, and slept the whole time in her little swaddling hospital blanket--I couldn't even feel her through all that cloth!  After a while, we left to stay with friends.

Later that day, things went downhill for Hannah.  I later found out that they had taken Hannah away because she wasn't breathing correctly, and the doctor had come in and told my mom her baby had Down syndrome.  All I knew was that Hannah was in the hospital, and we couldn't see her. Mom and Dad didn't tell us she had Down syndrome.  I remember standing outside the glass door of the nursery (NICU?), and my mom pointing out which incubator was hers.  She looked like a giant, since all the other babies were preemies!  Over the next three weeks, Chris and I made signs to hang on her incubator, and visited the hospital with Mom and Dad.  I had no idea how serious Hannah's situation was.  I thought there was no doubt she'd get all better and come home.  I remember watching them move her incubator into an ambulance to take to a hospital more equipped to deal with her medical issues (pulmonary hypertension--high blood pressure in the lungs, which stayed with her in some degree until she was 2).  When I was considering this blog post, I wondered why my parents would take us to see that happen.  Now I realize they were worried it would be the last chance we would get to see our sister.

After she was moved to Carolina Medical Center (CMC), a nice NICU nurse snuck Chris and me in to see Hannah (parents only allowed).  It was crazy--Hannah went from a little raisin to a big grape, because of all the water she was retaining.  She had funny sunglasses to protect her from lights for her severe jaundice, and tons of tubes.  As we left, we walked through the pediatric unit, with jungle animals painted on the walls.  My dad made an offhand comment: "If Hannah has her heart surgery, this is where she'll stay."  I can picture clearly in my mind the glare my mom gave him.  I knew something was up.  On the drive home, just past the cement truck intersection (every time we drove past it, there was a cement truck!), Mom explained his comment.  She said that Hannah has a problem with her heart, and is going to need surgery.  Chris and I started crying. I asked, "What else is wrong with her?"  Then she said that Hannah has Down syndrome.  I said "NO!" and kept on crying.  I must have had some idea of what Down syndrome meant, otherwise I wouldn't have reacted, but I couldn't remember seeing anyone with it, though I know I must have.  Mom asked us what we thought Down syndrome meant, and I think I said something like "It means she'll be stupid."  I was so upset.  I don't think "devastated" would be too strong a word.  First, my little sister wasn't chubby and beautiful.  Then, she was in the hospital forever.  Now, she had Down syndrome, and had to have heart surgery.  Mom said she hadn't told us before because she wanted us to get to know and love Hannah before we knew she had Ds, so that it wouldn't matter to us.

Once Hannah came home, it didn't.  Mom dressed her in a starfish outfit, with a hat I hated, but she was still really cute.  She was a great baby.  When she smiled, she would open her mouth as wide as it could go, and we would kiss inside it.  We called them "moon smiles."  We met other babies and children who had Down syndrome, and started attending DSAC, the Down Syndrome Association of Charlotte.  Growing up, I always knew she had Down syndrome, but I never thought about it when I looked at her, or played with her, or she let me hold her (when she was a little older, she didn't want anyone but Mom touching her--Mom would hold her, and then we'd have to pretend it was Mom's hand rubbing her back, not mine!  Whenever she figured it out she was so mad.).  She was going to therapies, started crawling (with one butt cheek up in the air), started talking ("woof" meant "dog" at 9 months!), signing ("more!"), and reading sight words.

As she grew up, she was just Hannah.  Yes, I knew she had Down syndrome.  I knew she would have a tough time learning.  I knew other kids might make fun of her.  But she was still my sister.

As my mom said a while ago, I wouldn't take the Ds away from Hannah, if given the choice.  She is such a strong, beautiful, smart, independent young woman, and I know that without having to work harder for things that come easily to others, she wouldn't have the strength of character and mind that she does now (read: stubborn).  While I don't think she really gets what it means to have Down syndrome yet, when she does I hope I'll be there to explain what it was like for me when I learned she had Ds, and how it never stopped me from loving her, just made me love and want to protect her more.


at Easter Seals camp for kids with Ds and their families, last summer 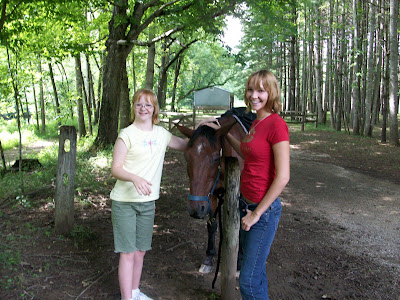 If it weren't for Hannah, I wouldn't be halfway around the world teaching Special Education.  I wouldn't want to adopt children with Down syndrome.  I wouldn't call people out on using the R word (well, maybe I would.  But not as passionately).  She's the Baby Boo to my Sully.  The Nemo to my Dory.  The Murray to my Anthony (.....or Jeff).  I love her, and I love that she has Down syndrome. 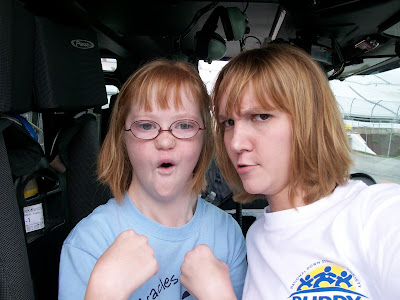 Glad you hijacked your moms post to write a great post ;) it warms my heart to see the love between kids and their siblings with special needs.

You forgot, "The macaroni to my cheese"!!

kate! what a great post! you made me cry :) what awesome sisters you two are!!

What a great post! Thank you :). I always love to hear sibling perspectives. Our Jonathan has one older sibling and 3 younger siblings. Thank you for sharing!

What a beautiful story. Thank you so much for sharing.