A couple days ago was Kate's one-year anniversary in Jordan.    It's gone by quickly, and also s-l-o-w-l-y.   It's been less than three months since I was there, but it feels like I was there ages ago. 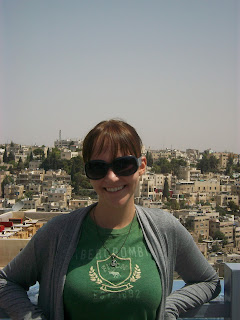 Kate has been having a challenging time in Jordan--everything is more difficult than it should be, and she's been frustrated with several situations.   But now that she's counted down her first year, she's got a new countdown--she just bought her tickets for a visit home!   She'll be coming home for a few weeks in late January!    We're so excited!   Three months until she's home! Can't wait!
Invented by Beth at 9:00 PM