Down syndrome is so strange.   I've been living with it for a solid 12 years, and yet, when I think about it, the more difficult it is to define.

Surely there is the simple scientific definition, three copies of the genetic material on the 21st chromosome.

But when I try to tease out what parts of Hannah are "Down syndrome-y", I have a hard time.

In the early years, it seemed that EVERYTHING about Hannah was BECAUSE of Down syndrome.   I might have already written this before, if so, forgive the repetition.   I once read an essay written by a father of a child with Ds.   He said that when his son was born, it seemed that 90% of the baby was Diagnosis, and only 10% felt like his son.   But by the time the baby was a year old, the ratio had inverted--the son was 90% and Down syndrome only had a grasp on 10%.

Since Hannah was born with life threatening medical issues unrelated to Down syndrome, we really didn't pay much attention to genetics.   We just wanted her to live.  Once we knew she was going to survive, we started to focus on our next steps--figuring out how to raise this child--and figuring out this chromosome.    Turns out, she was pretty much like our other kids.   Yes, we signed her up for Physical Therapy at 10 weeks.  And OT and Speech therapy by the time she was a year old. We all learned some sign language. It seemed overwhelming at times.  But looking back, mostly she was just a regular baby.  She nursed, she cried, she ate, she sat, she crawled, she talked, and she eventually walked.  Down syndrome was a part of her, but it wasn't who she is. 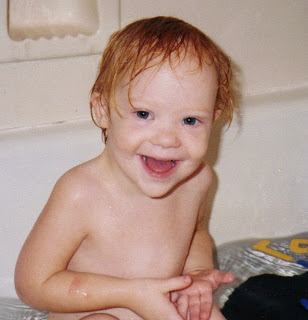 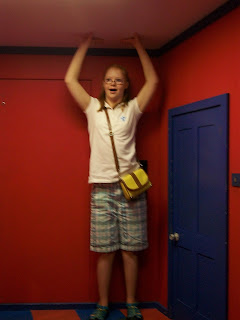 12 1/2 years--My how she's grown!
Now, at this pre-teen stage, I'd guess I could attribute about 3% of Hannah directly to that extra chromosome.   All the rest has melded together.  Down syndrome still isn't who she is.  But I can't imagine who she'd be with out it.  Certainly she stands out in a crowd.   It's obvious that she has something going on--people take a second look to try to figure out what the deal is.  That's fine with me. I don't think she gets "stares", she get curiosity.  And smiles.   She doesn't seem to notice.  I don't notice.  And we're good with that.
Invented by Beth at 9:00 AM

great post! I really try not to credit things to Marissa's extra chromosome, although I do catch myself at times explaining why some things are the way they are. :-) Eventually it'll all fade to the background.

It's going to be a busy month for both blogging and blog reading, but I'm looking forward to seeing everyone's posts. Maybe it's because Claire is my first, but I think my life has changed WAY more by having a baby, than by having a baby with Ds...