No more dorm life!   Yesterday we officially moved Chris into his rental house down in Williamsburg. He's been staying there off and on this summer. Since he has a summer job now, we figured we'd better get the bulk of his stuff moved in.   I'm sure he'll appreciate having a real bed now!  No more old futon. 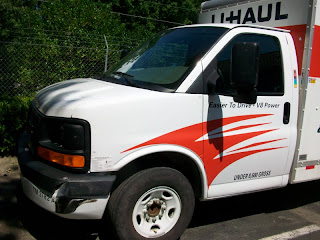 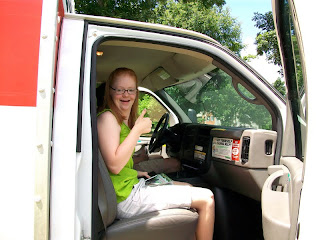 His house is cute on the outside, and "college" on the inside! 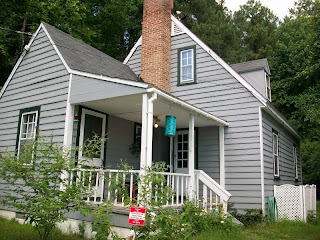 Three Men and a House.  One is vegan, one is vegetarian, and one is Chris.   I know they're going to have a great year!
Invented by Beth at 12:30 PM 3 comments:

Hannah subsequently followed up with her own burp.  She said, "Excuse we."

Long live Elvis!   We were at the Williamsburg Outlets the other day (visiting Chris).   Hannah was so excited to see an Elvis store!


Only problem was that it just looked like a "L-Elvis" store: 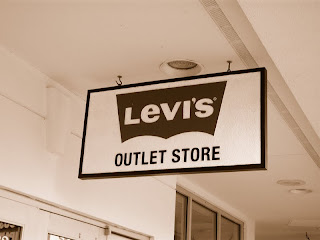 Friday was our last visit to Kennedy Krieger.  We are always met by Miss M., the Research Study Assistant.  She's our guide and chaperone throughout the many-hour long visits.  She schedules our appointments and answers all questions, and waits with us through all sessions.

First stop was Neuropsychology.   Hannah was happy to see the psychologist again (she loves those tests, crazy girl).   She was in there about 75 minutes while I filled out the parent questionnaires--they always seem to have very obvious questions that are targeting the autism population.   When she came out, it was my turn to be interviewed by the psychologist. She is quite nice. She began the interview with me, recording answers as she proceeded.  She started laughing when she got to the question about whether Hannah could/would initiate a conversation with unfamiliar people (answer is: Yes).  Apparently, in the middle of one of Hannah's tests there was a picture of some kids in costumes trick-or-treating.  There was a witch, a clown, a cowboy and a few other costumes. Hannah answered whatever question was asked, but then started a conversation about how the Egyptians would remove the brain from a dead person's head in preparation for mummification. Sometimes Hannah's input to conversations seem total non-sequiturs. But they never are. The psychologist looked closer at the picture, and sure enough, there was a kid in a mummy costume!

All the testing went well. We had a quick lunch before heading over to the medical side of things (a short drive to another building). I was looking forward to hashing ideas out with Dr. Capone. We were in the waiting room for a bit until Miss M. caught up with us. I was surprised and disappointed when Miss M. mentioned that Dr. C was not there. He had a family emergency and had to go to Connecticut that morning. I was unhappy that she hadn't told me two hours earlier--she knew all along that he wasn't there.   Grumph.
I was able to have a conference call with Dr. C, but it wasn't the same as him being there.
So here's the low down:
He has not received any reports of regression when ending a course of Rivastigmine.
He believes we could proceed safely with using Rivastigmine.

He did not really answer my question asking if he had any patients who have been on a long-term course of Rivastigmine.
Possible long term side effects would not involve neurology, but instead would  involve the same side effects they were watching for in the study:  nausea, vomiting, eventually ulcers would be possible. These side effects have been reduced substantially by slowly weaning in the dosage (similar to what we did in the research trial). Side effects to this point (in the body of research) have been relatively limited.
If we decide to proceed with the medication (the official medication--they cannot reveal that Hannah did or did not receive it), we can add in the ginkgo to her supplements. Ginkgo addresses the excess GABA in the brain, but Rivastigmine works on the acetylcholine channels, so there should be no interaction between the two.
His last comment was "There is no question that uncertainty comes with the territory."

It's amazing how quickly the time has passed.  We started this drug trial in January, and now it's over.  We started with it to advance the body of research in the Down syndrome population.  Now we have to figure out if we want to make the decision to make this about benefiting (or, possibly, damaging) Hannah.  Switching from a global perspective to a personal one is going to take some time for me.  We have seen positive changes in Hannah's language and memory--larger gains than we have seen before.  Should we stop now? Should we see where it leads?  We want to provide Hannah with every opportunity to succeed.  Is this an opportunity?  Or a temptation?