I have 3 minutes left to get my post in for today!  Yikes!

All I've got today is a couple of pictures of Hannah's busy day.   We had a full morning of school, followed by a few chores and then off to the barn for her first riding lesson of the fall.

First she got a little bit of swinging in with a couple of her friends... 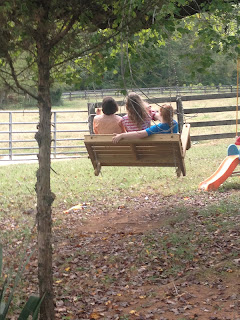 Of course, I only had my phone, so these aren't all that interesting.... 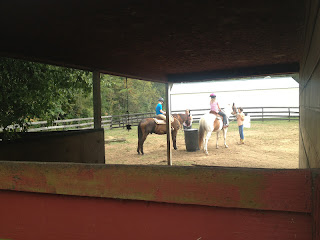 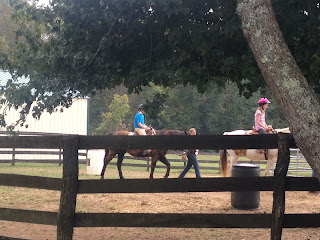 How about this wild spider?  I've never seen one like it!   It's about the size of a bit toenail.  Anybody know what kind it is? 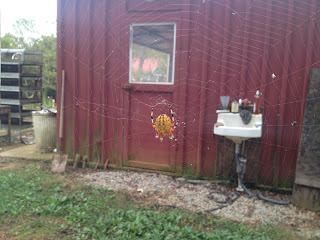 After horsing around, we scurried off to Hannah's art class.  No pictures, since I don't go in and embarrass her.

Next up was Hannah's guitar lesson.  This was her second lesson.  There's a lot of fine motor stuff going on with a guitar, but she's working it out pretty well.  Her teacher has never been around anyone with Down syndrome before, but he's willing to do what it takes to get my girl rocking!

This is what I get for procrastinating.

Well, actually, that's what YOU get for my procrastinating:  nothing.

As consolation, I will let you know that James and I finally told Hannah that we had a surprise for her later this month: We're taking her to DisneyWorld!   We took her for the 10th birthday, but got sick after the first day and spent most of the week in the hospital.  Yes.  That's how things go some times.

So, we told her we were going--and she totally freaked out--yelling and dancing and forceful high 5's!  It was really funny.  She got her calendar out immediately to add the dates to be sure she doesn't forget (as if....).

That's it for this tired mama.  Hope you're all enjoying the feast of DS propaganda that's taking over blogs and Facebook!  Love to you all!

(P.S.  I cheated.  I post datedthis.   It took me more than 3 minutes to write this....so just pretend that you don't know I cheated)

Oh I love it you cheater you! Now you have to let me know how you did it! Ha ha! I am the queen of procrastination too! My husband was lying in bed all squinty eyed while I re-edited mine last night and fought with blogger/iPad scrolling and adding photo issues. Poor guy! He does know how important our blogging this month is...... Ha ha! In all seriousness thank you for joining in. So many of us have little ones , it feels good to read about the older years.

I found your blog today through the blog hop. I subscribed and can't wait to read more!