One of Hannah's big challenges is spelling.  She can articulate all kinds of ideas.  She has terrific penmanship.  But she has a hard time with spelling.  So she doesn't do much unsupervised writing--she likes to dictate and have me write down her ideas.  Then I make her copy it.  She's making progress with spelling, slow and steady, and, umm...slow.

We've tried many spelling programs and techniques.  Some worked better than others, but basically, English is a bear to learn.   It's a really lousy language to spell (and read too!).   There are so many combinations of letters that make similar sounds, as well as unfathomable combinations ("eight"??).

Aside:  Did I ever tell you that Hannah always says "height" to rhyme with "weight" and "eight"?  It cracks me up.  "Hate".   It's so funny when she reads that word.

I learned this technique from a neurodevelopmentalist.   Our kids with Down syndrome have trouble with short-term memory.  So we need to input the information into the student more frequently than a typically developing student would need.  Input input input.   Output will come at some point.  If the student is not giving output yet, that means you have to keep on inputting!

We make a flash card of each spelling word.  It's important for Hannah to see the word clearly, without other words nearby to distract her.   When making a flashcard make sure none of the letters in the word touch each other.  This is REALLY important if your child is just starting to learn to spell.

My turn:  I hold the card.  I say the word.  I spell the word.
Hannah then while looking at the word, spells it.  Then I flip the card down, and she spells it again.

When it is a new word, or a long word,  she might need a couple tries before she gets it right.   Sometimes on really difficult words Hannah chooses to finger spell the word as well. (sign language)  I think this is a smart move on her part--it gives her a physical way to remember it using her motor memory.  (motor memory= muscles remembering a pattern or behavior that doesn't necessarily involve language or short-term or long-term memory--it's not ideas, it's just what your body knows without thinking.  Sort of like typing.  You don't have to think about it, it just goes through your fingers.)

Sometimes a word is difficult and she gets letters mixed up or skipped.  When that happens, I usually try to make a sort of sing-song way of spelling the word or a rhythmic cadence with the letters. Or,  we'll tap out a rhythm as we recite the letters.

Sometimes she closes her eyes to recall what the word looks like.  She can get over a spelling glitch by visualize the word if she consistently transposes letters in a particular word.

We go through a set of 10-15 words each week.  Or two weeks, if we need the time.  I choose words from the Dolch list as well as words that she uses frequently in correspondence or just words she likes.

I don't ask her to write them until she can spell them out with her voice.   When she can speak them,  we add the pencil.   Once I know she can write them, I test her.  I don't test her until I know she can be relatively successful.  I know this isn't an option for kids in regular school, but I generally work on a "quit when you're still successful" principle.   If you push too hard, you'll end up grumpy,  same as your child.

Sometimes we use letter tiles to build her spelling words.  Digging through the letters makes her really recall which letter she's after, in addition to working on alphabet skills. 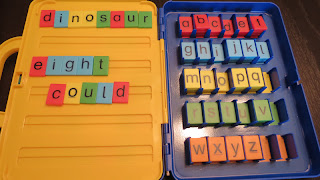 This is a part of a spelling game (of which I am not fond). 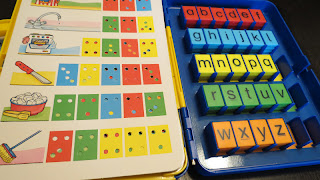 Each tile has a few little pegs on the back.  Only the correct letter will fit in a specific block, so sometimes it's just trial and error.  The colors provide limited options, so that might be helpful for some students.    There are too many useless words--look at that picture at the top of the picture.  I think it's a faucet.  Somebody might say "sink".   But no.  It's "tap".  A good word to spell, but a horrible illustration.

We only use the letter tiles, not the spelling cards.   Don't ever feel bad about not using the instructions in a game or lesson.   Use what works for your student.

What in the world do you think this is? Study them and you might discover a clue to our destination next week!

What a great idea with the spelling flashcards. I am filing that away for future reference. And oh man on that last picture clue ... I would never have thought of sugar! The tiles, though, seem pretty cool.

I love this post! I read someone else talking about the flashcards for her daughter, and I think that's a fantastic idea. Thank you so much for posting this!!
Btw, I totally got that that last picture was "sugar." That's what I thought immediately, before ice. Sorry. LOL

I am just now reading this post and love it, of course. If you haven't already, check out what I wrote on 10/22. You inspire me even when I'm unaware!