I saw this picture on the wall in down a hallway at NIH today.   I have a childhood friend who was born with Down syndrome and needed heart surgery as a baby.  She was born in 1965.   I wonder what it was like back then.  I'm glad Hannah had her surgery when there was much higher success rate (though my friend had completely successful surgery).

NIH is a pretty big place.  The security was pretty tight! I wasn't expecting that. We had our car searched, and all our luggage and bags had to go through a scanner like in an airport.  The security guides were very friendly and kind to us.   I don't know if they are always that way, but I was suspicious.  Sure enough, one of the women had a nine year old grand-daughter with Down syndrome!

The admissions process was confusing and not very welcoming.  Our admissions officer must have been having a really bad day.  That's all I can say about that!

We met the researchers:  Dr. Nancy Lee and her assistant Elizabeth Adeyemi.   They were both warm and charming.   Hannah easily went into a little room to start her cognitive testing.  Meanwhile, James and I spent a couple of hours filling out questionnaires (8+ different surveys and assessments).  Through the door, we could hear Hannah giggling.

At lunch time NIH treated us to cafeteria food!  How about that?  It could have been worse, so we can't complain.

We had some free time.   This is how Hannah passed the time:


After our lunch break we went to see the mock MRI.  Hannah had earlier expressed some concern about the MRI.   We explained that this was a fake one--it was just practice time so she could get used to it.    There would be a recording of the noise a real MRI would make. 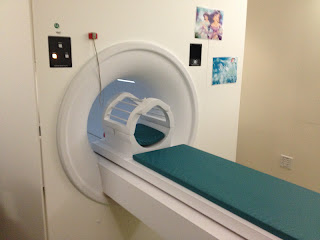 We all put in ear plugs.  Hannah said, "Whew!  That's a relief!"   But she wasn't really relieved.  She was quite worried. 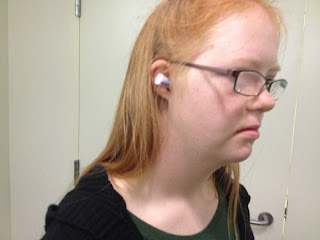 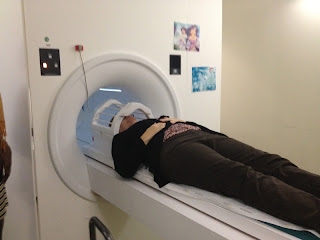 It wasn't bad at all.
But when it was Hannah's turn she was hemming and hawing.   She eventually convinced herself to get on the table.   We pushed in into the "tunnel" a little bit at a time.   She acclimated pretty well, though she wanted to talk the whole time.  I thought she'd have balked at the head "cage" thingy.   The "halo" had a little mirror.   When she actually does have the MRI she will be able to see a video of her choice on that mirror.   They will create MRI-safe glasses so she will be able to see the video!  How about that?   Hannah liked that idea quite a bit. 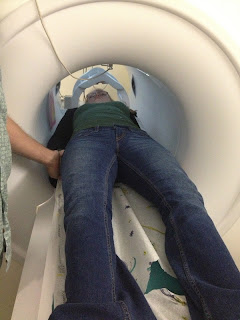 After the MRI practice there was more cognitive testing.   She lasted another hour or so, and then was burnt out.

It was a successful day.   We even got out of most of the DC traffic!

If you're interested in reading about Hannah's previous study for an Alzheimer's medication, you can look here:  Rivastigmine.