We've had a really lazy day (well, at least, Hannah and I did).   I stayed in my jammies until 2:30.  I read my book club book (The Language of Flowers by Diffentbaugh).  I really enjoyed it, even if some of the plot was predictable.   Hannah watched some TV, then did some art/coloring while listening to music.

Since she used up her "screen time" in the morning, she decided that we should have a Family Game Night later on.   Kate would be home and maybe all four of us could play Life.

Daddy couldn't play since he had business calls since he's a property manager and has buildings all up the East coast.  Sandy is causing trouble....

But the three girls had a good time.

Hannah brought out some treats...spooky lollipops from the Haunted Mansion! 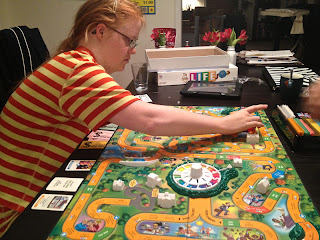 Both Kate and I were really impressed with Hannah's money handling!  It's one thing to count out by fives or tens, but she had to do a combination of 5's, 10's, 20's, 50's, 100's (all in Thousands!).   In her schoolwork we've been polishing up counting coins (a never ending task).  She knows them pretty well.  She can give any exact amount of cents using a combination of coins.  But with our real money we don't have a twenty-cent coin.  And 50-cent coins are not very common.  So she had to figure out how to create $35,000 or $75,000 or $15,000 with the pretend dollar notes she had.  It was tricky, but she did it perfectly!

Even with her good banking skills, she didn't win.  I did!  Yay me!  Millionaire Acres, here I come!
Invented by Beth at 9:18 PM