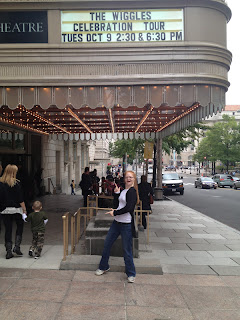 We had a good time at the concert.   Hannah was thrilled to go back in time and groove to the tunes, motions and all! 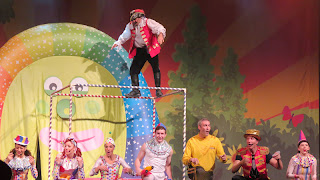 It was a very small venue--in the past we've always been in Coliseum/Arena kind of places.  This was a small stage, which made it more intimate.  And bustling. 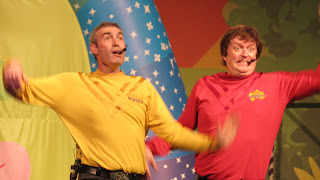 Can you believe that Murray is 52 years old?   Hannah told me that he was "tired".   Then I had to explain what "retired" meant.  No doubt he is tired.  That man has wiggled way too much. 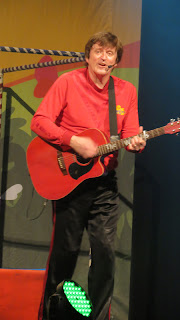 Anthony is the best--he's energetic and funny.   We were happy to see his digeridoo.  (Tom Chapin has a song about a digeridoo that is pretty cute if you want some good witty children's music.) 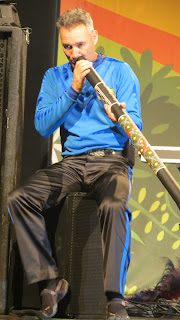 Our seats were in the middle of a row, so there wasn't much opportunity to catch the eye of any Wiggle.   But a little girl was afraid to deliver some roses for Dorothy, so Hannah offered to do it. 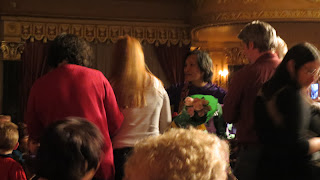 So here she is giving the roses to Jeff to bring them up on stage.  I couldn't see much of their interaction, but Hannah came back to her seat with a smile on her face and stars in her eyes---Jeff shook her hand!
(Yes, it seems Jeff is planning on growing his hair long in retirement...) 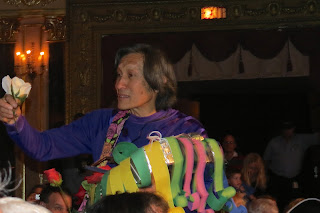 Today she was busy telling people about the concert.  The one thing that really stayed in her mind was that there were the new Wiggles in the show too.  The three new ones were wearing shirts that said, "In Training". 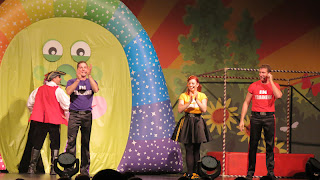 The Wiggles Chapter of our lives is over.  No need to visit again--honestly, the show was a bit forced, and not as good as previous ones.  Hannah still could find some magic, which is why we went.

Can you tell I'm worn out?   Yes.   It was a long day yesterday, and another one today (schooling, art class, guitar lesson, company for dinner--get this!  They brought us dinner!  And then we watched a movie together).  And the next three days will be even busier.  Hopefully I'll squeak out my posts! 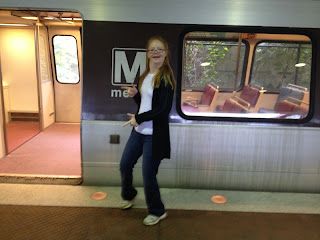 We were on the D.C. metro, heading into the city.   The first couple of stations were all on land, but then we started to descend underground.

Hannah: It's a time tunnel!!

A bit later we emerge to the surface. 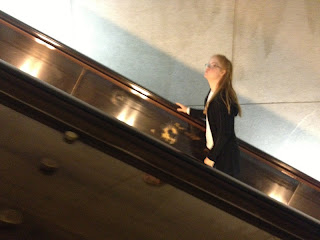 Pat pat pat on the back for getting your post done! I hope to take our little one to see fresh beat band one day, they were sold out at the closest venue before we "discovered them".