***Nutritional supplementation is controversial among the Down syndrome community.  Every supplement we use has been approved by our pediatrician.  Please know that I am just sharing our family's experiences and decisions.   I am in no way trying to convince anyone to do what we're doing.   I welcome questions and concerns, but please be polite. ****

If you have not yet read my previous vitamin posts, please go here.

I've kept my silence for quite a while.   We had a difficult decision to make after Hannah's drug study last year.   We signed her up for the study to further the body of Down syndrome research.  We saw tremendous promise in Rivastigmine.   But we couldn't bring ourselves to give her it to her without knowing anything about possible long term side effects.   The doctors said that the few side effects were GI in nature (upset stomach, possible ulcers).  But the medication is used for people with Alzheimer's Disease.   There isn't really a "long term" for patients with Alzheimer's.    And our child is an adolescent.   That's a whole different situation.

So we had a very long discussion with our very knowledgeable pediatrician.   She helped us tease out the options--what did we want.

Well, truly, we were very entranced with Hannah's progress with Rivastigmine.  She was so sharp--her short term memory was the best it ever was.  We didn't want her to regress.   We wanted progress, but we wanted assurances that the negative side effects would be extremely minimal.

Dr. M. suggested we look into the research regarding neural genesis and Prozac.  (I already had read everything on the Changing Minds Foundation long ago.)  Hannah's been on Ginkgo for years, and we've done the oils for a decade, as well as a dozen years of Nutrivene-D.   Prozac has a very long history with children/adolescents, with minimal side effects.  It has a track record.

We decided to give it a trial.   I was sort of hoping that "Vitamin P", as we call it, might smooth out some of Hannah's mood swings.  Dr. M mentioned that the Prozac might lessen some of her OCD tendencies.  (Hannah, as most people with Down syndrome, had a few OCD quirks--all doors must be shut--including cabinets and drawers, getting stuck into routines, and being exceptionally attentive while cleaning her room (2-3 hours long--granted, her room was a mess, but she doesn't cut any corners when it come to "organization", even if it's not MY kind of organization).)

We started on a low dose.  Within a month we noticed that we had more pleasant days without random crabbiness.    She also diminished some of her OCD trends.  After 3 months we went up to 10 mg.   No change.   Four months later we upped it to 15 mg/daily.

We did not see any cognitive gains.   Life was considerably more congenial.   Don't get me wrong-we always thought Hannah was fine--she had good behavior, she was just randomly moody before.

Dr. M is very cautious.  She has many patients who are on the complete Changing Minds protocol, and all are doing well.  I was eager to try the over-the-counter Phosphatidyl Choline (PC).   Rivastigmine is a choline based drug.  It helps the brain to provide/support acetylcholine (a neurotransmitter) which is in short supply in both the Down syndrome and Alzheimer's populations.   Our brains use acetylcholine to send message from one neuron to another.  This is the foundation for filing things from short term memory (which is quite weak in the Down syndrome population) into long term memory (which is a relative strength).  Rivastigmine has been proven to increase short term memory skills in the Down syndrome population.  Choline is deficient in the DS metabolism.  Choline is also key in keeping cell membranes intact. 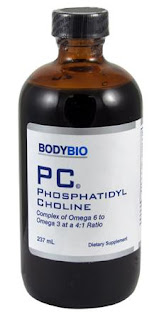 We finally got the go-ahead to start PC in late August.   This stuff is EXTREMELY expensive and generally tastes disgusting. Sort of tastes like tar and molasses.  The dosing is a little bit murky.  It's not like we could overdose her, but we'd like to have an accurate dosage so we don't use more than needed. (It's about $180/month.  yes.  ouch.)   There are cheaper versions, and we'll tweak our 1 Tbsp daily sometime, but we want to get a baseline to see how it's working.

About a week after starting the PC, Kate told us that no matter what, we should never stop giving it to her.  They had been were out and about and Hannah was so very chatty and coming up with all kinds of questions and conversational topics that we had never seen or heard before!   She's been on a roll since we started PC.

At this point, I can tell if Hannah's had her daily dose of PC or not.  Her school work is considerably better--her short-term memory is better, recall is better, auditory processing better.   It's not the same as with the rivastigmine, but she's making progress.

We're not chasing down a "cure".  We're looking for ways to make Hannah's life better.  None of these things we're doing are to change Hannah.  In fact, as we see Hannah grow and develop, we think things like Ginkgo and Phosphatidyl Choline let us see more of who Hannah is.   That extra chromosome isn't just sitting there in every cell in her body.  It's producing excess proteins, producing excess waste products, it uses up too much of one amino acid or another.   It's making pollution in her head.  Neurons rusting.  We are just trying to keep the damage to a minimum.

Thanks so much for sharing. I've been seriously on the fence with PC and its always interesting to hear a skeptical parent's view esp acting with a doctors knowledge.
I wish I had a DR to collaborate with!

Thank you for sharing this great information. I have wanted to start PC, but I wanted some more testiomonies from other Moms!

This is very interesting! Sutter (in my opinion) is too young for prozac but I do see a lot of benefits to some of the other supplements we give and I'm all for anything that will help him be "him"! I see his little mind working and I just wish I knew what he was thinking...or that he could tell me what he was thinking! I'm going to start researching PC and see if it is something he would benefit from!

Thanks for this post......it was really interesting and something to talk to our docs about and do some research for ourselves. Owen is only 3, but if I can get him started on some supplements now that will help him for the future, I'd like to have some great information like this to start with!