Lord of the Strings

Today was Katie's last harp concert (at least for the foreseen future). Oh, how I wish I had been there! I would have loved to surprise her, but I just couldn't juggle everything around to get to Minnesota for just one day.

Kate started playing the harp when she was just five years old. 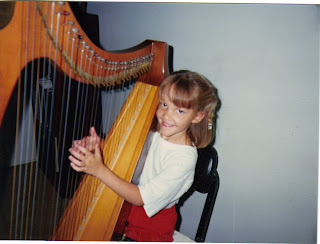 This picture is from her first Christmas Recital when she was six. 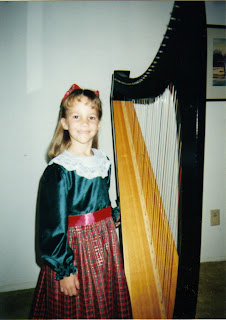 Here she is, age nine, playing with the Charlotte Symphony. To prepare for this concert, my mother bought her a new pedal harp. Kate wasn't tall enough to play a concert grand sized harp, so she played a Daphne. She was the youngest in the Youth Ensemble. You can see that her harp is smaller than the others. 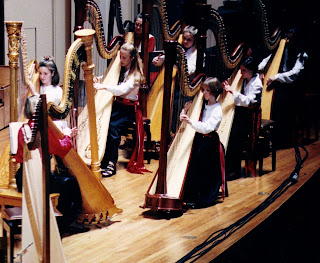 Kate started playing professionally at the age of 13 for weddings and parties. Whenever it's time for her to get married she has everything planned out--she's learned exactly what she wants and what she doesn't want after being in 40+ weddings!
Here she is at age 14, receiving her new Camac concert grand, again a gift from my amazingly generous mother. 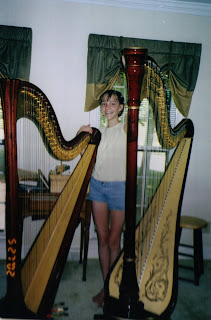 Kate was in an Anglican style girl's choir for many years. This picture is from a concert where she accompanied her choir (Benjamin Britten's Ceremony of Carols, for you music geeks out there!). 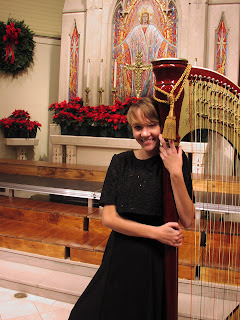 I think her all-time favorite harp job was when she was 15. She was hired to play for a Lufthansa party and they paid her with a free round-trip ticket to any Lufthansa destination! She chose Spain, and went to a language immersion camp for several weeks.

I can't find any recent pictures of Kate harping around, so I'm hoping someone took some today!
She said the concert was, "so great!!" I know she had adoring fans cheering her on, but I wish I could have been one of them!
Well done Kate! We wish we could have heard every note! Can't wait to hear the CD! Only 7 weeks until Graduation!!!!
Invented by Beth at 9:30 PM

I love the harp! Sorry you had to miss her concert.