Children (and adults) with Down syndrome really engage with music. Just attend any Down Syndrome Conference and there is sure to be a karaoke contest and a dance. It is completely wild. And hysterically fun.

Hannah has always loved music. When she was just six months old we caught her swaying her head back and forth, rocking to the rhythm of a song. She has learned so much from songs--calendar skills, counting, ryhming, penmanship (yes, really! HWOT songs), jokes, how to cross the street...it's amazing. All that from listening to CDs. If I make up a song (usually an amazingly lame witty song) about something, she'll remember it so much faster than if I just use spoken words. I don't know what it is about adding a tune makes the auditory processing better. That would make a good research study for some Psychology graduate student.

A little off topic are we? Yes. Back to the originally scheduled post.

Since we began growing our family in the 80s, we started off with leftover Raffi, Sharon Lois and Bram, and Joe Scruggs. We were already well sick of them before Hannah was born, yet that's what we had on hand. She loved all the songs, as dated as they were.

When Hannah was little she loved the Discovery Toys CD, Sounds Like Fun. It is slow and repetitive (= annoying), but she learned most of her letter sounds from this CD.

Though he's not a singer, Jim Weiss is another of Hannah's favorite performers. He tells the most wonderful stories. All of my kids have loved Jim Wiess' recordings. It did take Hannah while to actually pay attention to a CD without songs, but I looked at it as another auditory processing exercise. (Books with a tape or CD recording is another thing entirely--they helped tremendously with her reading speed--terrific practice for emerging readers.)

Bill Harley and Billy Jonas are two other musicians Hannah enjoys. I don't think they are quite on the same level as these next two perfomers though.

In the past few years she's become a fan of Tom Chapin. We don't mind Tom so much, since most of his songs are witty and clever. Hannah has been to a few Tom Chapin concerts (and Kate has even been a back-up singer for him, but she doesn't like him much. Sorry, Tom, the truth hurts, I'm sure.) Some of our favorite CDs of Tom's are This Pretty Planet, Family Tree, and Zag Zig. If you want a sampler of his songs, try Great Big Fun for the Very Little One.

Here are Hannah and Tom after a concert a couple years ago: 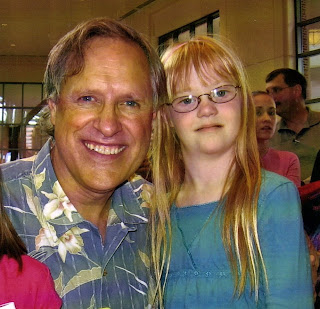 The concert was doubly exciting because another of her favorite singers was there as well. 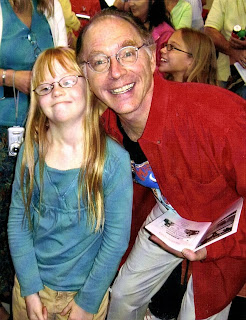 This is Red Grammer. He has some very catchy songs. If you've got a preschooler, start out with Can You Sound Just Like Me. If you like it, then move on to Down the Do-Re-Mi, and Hello World (which is probably better for early elementary ages).

Have you noticed that Hannah only likes male singers? That's not completely true. She does like Cathy Fink, and, of course, Shirley Temple! I recently discovered that Hannah actually can *almost* match pitch if the singer has a high enough voice. I can't sing high enough for Hannah to get into her "head voice". Perhaps there is hope for her--once Kate comes home!

One common thread to Hannah's favorites is that all of her preferred performers also have DVDs of concerts. She really likes to play back-up air guitar when she watches any of these guys perform! (Did I ever mention that she's asking for an electric guitar when she turns 13?)

Sydney loves music as well. Especially when she can shake or bang some kind of instrument along with the music. I will take note of the artists that you mentioned. I am always looking for more music for the kids.

How cool that you got to meet Tom Chapin. I just deleted Sharon, Lois and & Bram off my Ipod ast week. I had to make room for Now 29 & 30. They used to be my favorites.

I played the Discovery Toys tape (now on CD!)Sounds Like Fun for my child when he was going down for a nap. It is gentle, sweet music, sung by Barbara Milne. Discovery Toys now carries other CDs. One is called "I'm Going Green" and has adorable songs about the environment, riding bicycles, going fishing, recycling. There's also a Joe Scruggs CD and a Spanish-English bi-lingual Latin-rhythm CD. You can find them all at www.toysofdiscovery.com