Oh, I'm about 20 posts behind...at this rate you'll probably see Hannah's costume in January! I've started to make little notes so I could remember all I wanted to write--Hannah's been pretty funny these days, but I think I "organized" them. Probably to the recycle bin.
We've been on the go pretty much non-stop. So far we're healthy, though so many friends have contracted the flu. I still haven't made a decision on the shot, which is fine, since it isn't available for us yet. Makes it easier to not make a decision!
We did manage to carve pumpkins today. Hannah did a great job! She has always been interested, but her help has not always been the kind of help that actually helps. This year, however, she cut the "lids" off the pumpkins and did most of the scooping. She tackled the slime and goo, and even did a little bit of the faces.
We had two pumpkins for the record books--in Hannah's pumpkin there were sprouting seeds! One sprout actually looked a little green. It was kind of like a pregnant pumpkin! Then, my pumpkin had such thick flesh that it was practically solid!

Make an on-line slideshow at www.OneTrueMedia.com
Now then, here is a short walk (very) down memory lane...
Age 8 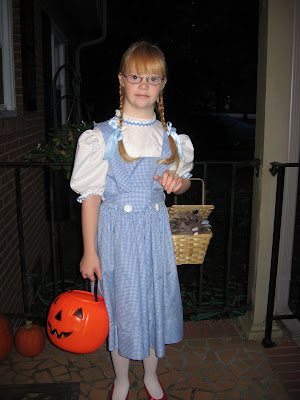 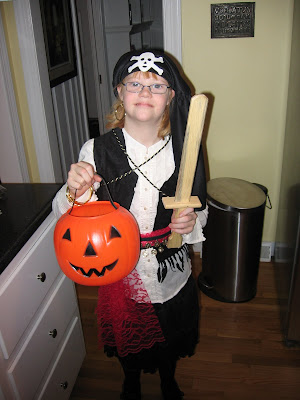 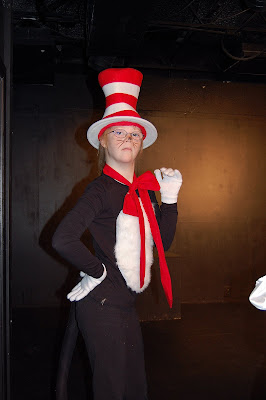 As you can see, Hannah takes her costuming seriously. I'll give you a hint for this year's costume: It's her favorite character from The Magic Treehouse Ghost Town at Sundown. I doubt there are many of you out there who are familiar with the story...let me know if you've got a guess!
Invented by Beth at 10:00 PM

My daughter, Quincy, loves that book but it has been a while since she has read it. :) So other than Annie and Jack, she can't remember the characters. :)

You mean she never dressed up as Murray? I'm disappointed. I'm hoping Mac or Lois want to be a Wiggle someday.....

Ahhh...Murray is so yesterday. Sam Wiggles is where it's at now. (at least for Sawyer)

Know what you mean about the H1N1 shot. Am seriously considering it for Sawyer but have my doubts. Doesn't matter since we don't have it around here either.

Behind? I can relate, I keep writing down in a notebook what I want to blog about, but I have not posted in 2 weeks! My son has just started reading the Magic Treehouse series, so I am not yet able to make an educated guess. I love the costumes, Hannah is so animated!