...we lived on Yerba Buena Island in San Francisco Bay. James was a Naval Officer, and I was a new stay-at-home-mom to a very demanding baby. We lived in Officer's housing on the island that anchors the middle of the Bay Bridge. The bridge actually tunnels through Yerba Buena Island. Attached to the island is a man-made island, Treasure Island, which was was the Naval Base where his ship was stationed. It was a lovely peaceful place to live, hills and trees, and a gorgeous view of the Golden Gate Bridge from our living room window. It was a million dollar view of the city, Alcatraz and the Bay. 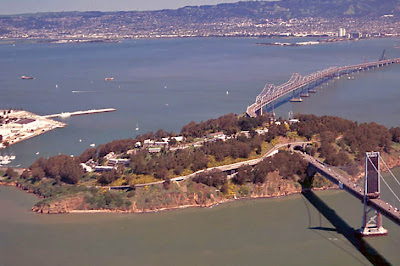 Our house is one of the ones on the second tier to the left of the picture.
This picture is looking towards the East, to Oakland.
On October 17th, 1989, James was navigating the USS Roark on a three month deployment in the Gulf of Alaska. Kate and I were flying back from North Carolina from an extended visit to my parents to celebrate Katie's First Birthday. While in North Carolina, Hurricane Hugo hit Charleston, SC, and then worked its way quickly up to Charlotte, NC. My parents lived in the country and had no electricity and no water for 10 days. It had been quite an adventure!
When Kate and I landed, weary and bleary, I decided to go the long way home because I feared the traffic from the World Series would be horrendous (Oakland A's and SF Giants, both local teams!). So I headed South and took the San Mateo bridge and came up the East Bay, on Route 880, then across the first span off the Bay Bridge. I had considered stopping along the way to get milk at the store, but was too tired, so we went directly to our house. We had been away from home for a month.
So we pulled up to our house. I took Kate into the house and stepped out again to get the luggage. As I was going out the door, she started crying, so I went back to get her. Then, the earthquake hit. I grabbed her and scurried out the door.
It didn't feel like a big one (we'd had several small ones in the year previous), but it was the first time we were on the island. The island is solid--a rock.
All my neighbors came out, and we chatted a little, compared damage (none for anyone). I went inside and called my parents, leaving them a message that we were home safe and that we just had an earthquake. I didn't think much about it, but it was very fortunate that I called, since within a few minutes all the phone lines would be out from overloading and fires. My parents had heard about the quake on the radio (they knew more than me). It was sweet relief for them to know we were safe.
I went back out to the car to bring in the bags. I was surprised to see a few people walking up the hill. I was a little uneasy because there are rarely strangers on the island, and this man was walking right up to me. He asked if he could use my phone. I hesitated. Then he said the bridge had broken from the earthquake! The very bridge over which I had just driven not 10 minutes earlier. 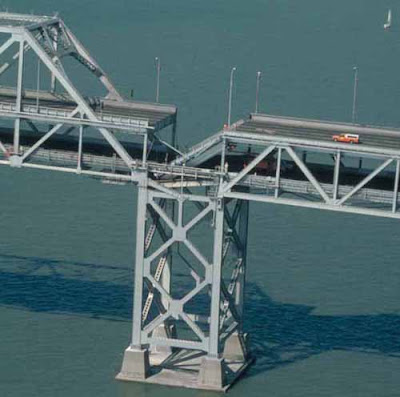 The man tried to use my phone. But already it wasn't working. A crowd was coming up the hill, and Base Police came to help them. Kate and I went back inside. The television did work, and I gradually discovered the disaster that had occurred. I had just driven the length of Rt 880--the double-decker highway that collapsed from the quake--killing 41 people instantly. 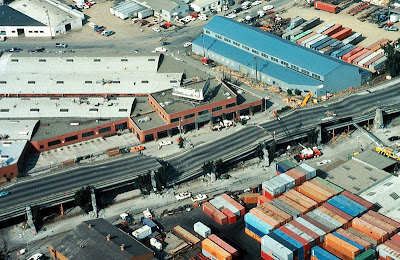 It was a miracle. If I had stopped for milk, that would have taken 10 minutes.
That night, out the picture window, all I could see were two endless lines of light. One of white headlights, and one of red tail lights. Gridlock. And there was the fire.
The USS Roark had new orders to come to San Francisco to provide medical and logistical support to the area. None of the crew had heard from their families--no cell phones, no email. Everyone was worried. It took 3 days for them to arrive in San Francisco. Somewhere along the line they did get a telegram informing them that all families were safe.
Those of us on the island were stranded. We had no way to get off the island for a week. (It was a good thing I was still nursing Kate, or we would have been in trouble!) The Island had water and gas, but no electricity (they shut it off the next day for safety). So we were safe, warm, clean, and I could cook. With whatever I could scrounge up. Neighbors shared. It was a good community.
But we did have cabin fever. Katie wasn't yet walking, but working towards it. We took long stroller rides all around the island, frequently stopping to see all the construction vehicles (the half that came from the SF side parked on the island). 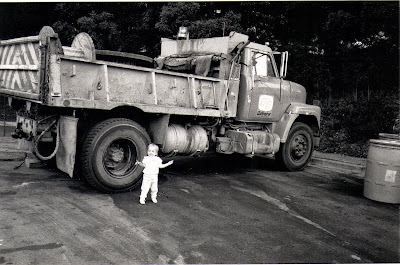 Kate took her first steps walking in the Bay Bridge Tunnel! I guess she was born to have adventures! 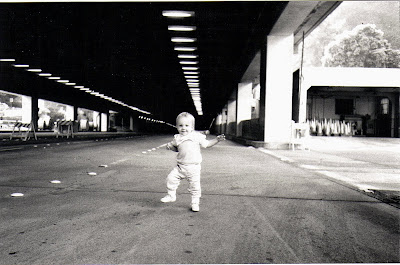 It was a chaotic but also, a quiet time. Another opportunity to appreciate our blessings.
Invented by Beth at 7:00 PM

thanks for sharing....so glad you and Kate made it safely home! James and I were living in Charlotte during Hugo- I was 5 months pregnant with Kirk-we had to eat off the weber grill 3 meals a day- I still do not like chargrilled foods to this day!

Boy, I have goosebumps over that story! The pictures are amazing -- but my favorite is of Katy walking in the Bay Bridge Tunnel!

Wow - I have goose bumps reading your story! What a miracle! Thank goodness you didn't stop for milk. Isn't it amazing how the small decisions we make can have such a huge impact! Thanks for sharing!

Wow. That is just...wow. Thanks so much for sharing your story. Those pictures of Katie walking are amazing.

I spent some time on TB island visiting the USCG last year, but I couldn't imagine living there. That's kinda cool.

Beth, My family was living in San Diego and Bakersfield at that time. I remember hearing about all the damage. I think the quake had radiated all the way down to San Diego. My sister had been on a trip and had just hours before had been on the 880. You were all blessed by God and kept safe.

wow, what an amazing adventure for the two of you. Loved reading your story.

Wow! Thanks for sharing this story, its amazing. I love the pictures!

Oh my gosh--I remember the earthquake so vividly, but it was images on a TV screen. I can't believe how you were LIVING it!

Beth, thanks for sharing the story, it puts life so much in perspective.