The little girls are happily back home. Can you believe that I never heard a whine or a wimper from either of them? I must be getting too nice! We survived (and enjoyed) the visit, and more importantly, so did Carley and Macey!
This morning Hannah was ready for some "alone time". I knew as soon as she came out of her room this morning, bedhead and pseudo-ready for soccer (scheduled for 4 p.m.), that she was interested in getting out of this house with little kids. She's got nothing on under that jacket. And no socks on--just shin guards. And Buzz Lightyear in that blankie. And a full backpack--dunno what's in it. (it's not quite as crazy as she was on this morning) 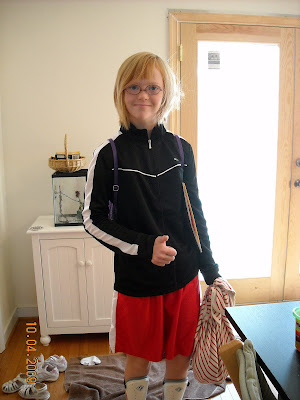 When told that it wasn't time for soccer yet, she said she'd go outside and play. Which she did, alone, for nearly 3 hours, without any breakfast. Then happily entertained our two guests with bubbles and silliness until nap time.

Now, back to your regularly schedule Hannigans:

The Bird had her physical last week. We're sort of off schedule, hitting the physicals on the half-year, but at least it makes for an easier birthday!
Our beloved Dr. M. was magical again. She is so encouraging, interested and thoughtful. Thoughtful is the best part. I don't mean that she is "kind" and "thinking about us", which she certainly is, but, she is often full of thought. She thinks things through. She measures her words. She is careful about what she says.
We talked together (all three of us) about what changes Hannah might experience this year (still waiting on the big adolescent milestone for girls). How she is doing with her academics and other endeavors.
Dr. M: How is the CPAP going Hannah?"
H: "It's great! I like it!"
I guess I have an odd kid.
Hannah has always been unusually tall for a child with Down syndrome. She is officially 5' 1.5" tall. That puts her in the 90th percentile for height on the typical chart. She weighs 97 lbs, which is the 50th percentile. We think she'll probably grow at least another 3 inches, so she'll be about as tall as I am!
Hannah was due for the DTaP booster. I always get surprised at this one--there aren't too many vaccines during middle childhood, so this one sneaks up on me. I am not a fan of vaccines, but I've sort of decided that it's one of the battles that I'm not going to wage. I will spread them out as far as possible. When she was little I had them separate the DTaP. Now that she's older, and healthier, I'm okay with giving her this one combined shot.
We had a discussion about flu shots. I am still on the fence about this. We have never done flu shots because my mother had Guillain-Barre, which has been linked to flu and flu shots (particularly the swine flu of 1976, which apparently has a historical link to H1N1). But, I have to weigh this carefully. Hannah doesn't really have any "underlying condition". She did have a heart issue, and she still has slight mitral valve regurgitation. But, she is healthy enough to get over colds without getting a secondary infection like she ALWAYS did when she was younger. She hasn't had pneumonia in years. Which brings me to the Pneumovax vaccine that Dr. M. would like Hannah to have. I have to mull this stuff over. I haven't done any "optional" shots with any of my kids...should I start now? Are the risks any greater? I know if I dip my toes in too deeply I will drown in the onslaught of the anti-vaccination movement. I need to be "informed", but I don't want to have to know this stuff inside and out--which I'd have to in order to form a true opinion. I don't have time, nor enough interest. I know that sounds bad, but there is only so much time to get things done. I admire people who have a passion for or against vaccines. My passions just don't lie in that direction. So, for all these years, my blanket policy of "only what's required" has been my line in the sand. And now, whether because of propaganda, or real threat, I am questioning myself. I also have the valued input of Hannah's trusted doctor who is recommending these vaccines. What to do, what to do? How alternative am I? What are the true risks?
It was hard to think all of this through while Hannah was bouncing around the exam room in her examination shorts! Just look at these disposable bloomers they gave her! They are huge! 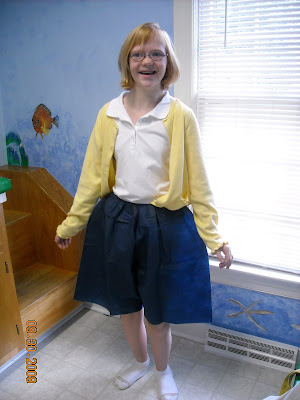 I think I could have fit in them!
Hannah was not so thrilled with the idea of getting a shot. She got herself all worried for the 45 seconds leading up to the shot: I don't want this Mom. It's going to hurt. I don't want it.
So I told her like it is: Yes, it's going to hurt, but just a little bit, and then it will be over. Hey look! She's getting the alcohol wipe ready to clean off your skin! (This actually is a distraction to her since she is interested in medical stuff.)
The nurse gave permission to tell her how much she didn't like it as loud as she wanted to when she gave the shot, but she couldn't wiggle. So Hannah sat there and said, "oh." and then, "Hey! Not so bad!"
I'm thinking that I'm pretty overdue for a tetanus booster myself. The last one I remember was when I was 12 years old...I probably had one when I was in college. So I'm less than 3 decades late. I'll try to get it when I schedule my mammogram...
Anybody else put themselves last? Don't answer that. I think we all do.
Invented by Beth at 9:30 PM

I am right there with you on that darn vaccine. We don't do flu shots, but I'm kind of freaked out on all the H1N1 hype. I think we're not going to get it, mainly because of the speed at which the vaccine was developed.

Hannah is just darling. She cracks me up!

love that first photo of Hannah! she is too cute! Noah and I dont do flu shots but my husband does.

I always have the flu jabs myself but so far have not been recommended to give Luke any. My stepfather recently had guillain-barre too, and I hear there is a reasonably high incidence of that after the swine flu shots, so will steer clear of that one. Over here it is separate from the usual flu vaccine, so you can pick and choose. It seems hard to get accurate info with relative risks calculated. Good luck with your decision.

Hannah's almost as tall as me! They are pushing the Pneumovax because they think it may prevent H1N1 cmplications. The CDC released an article detailing the types of pneumonia strains people had died from. I know my younger two have it, but not sure about my 10yo. However, after they received it I read that it is only effective against certain strains of pneumonia. Now that these strains are less prevelent stronger ones have emerged. That made wish we had skipped it. Sorry if this is more than you wanted to know!

I'm like you on vaccines. Don't have it in me to be far left or far right. I do get the kids the 'required' and they also get the flu (just because they are young and Sawyer's history of lung issues). I have been on the fence with the H1N1. I think it was rushed and it scares me. Does it scare me as much as the 'illness'? That's where the question lies.

That said, do I get mom any shots? Not so much. We all had HepA when we were adopting. DH had everything but Japanese encephalitis because he traveled to pick up our children.

Hannah, is so cute, I had to look at the picture in her bathrobe too and read that post. Sam loves to collect stuff too but usually in paper bags that I find all through the house or he trys to load them into my husband's pick up as trash. I'm thinking I should just have him go through my closet and then tell my husband that unfortunately Sam threw all my clothes away and I'll just have to go shopping. Probably won't work!

I have Gabe's five year shots coming up, and I'm uncomfortable. What battles do we choose? I'm not going for the flu shots this year -- again.

I, too, haven't been to a doctor for over one year...and lets not talk about the dentist...

Gabe is like Hannah. He's 41" tall (he's four and half) and he's a lightweight at 40 pounds. If I remember correctly, he's in the same percentiles as Hannah for the boys with Ds growth chart. I'm only 5' 2" and Terry is only 5' 7" so we're not sure how tall he will be...but I find it funny.

Often I hear remarks about his lanky height and frame...