Yesterday we had fun with some new friends from Northern Virginia. I met the mom, Angela, a few years ago when Wendy and I presented an oral motor workshop in Hampton, VA. At that time she had two little girls, four and two years old. Kathryn, the two year old, has Down syndrome. I had not seen Angela since then, until this summer when I went up to hear Sue Buckley in Fairfax (or somewhere close...I forget exactly where the seminar was!). She was there with her husband, and her newborn daughter, Christy. We caught up with one another that day, and have been periodically emailing back and forth. Since Angela and Paul were considering purchasing Numicon as a supplement to the public school's math curriculum, I suggested they come down to Richmond and look it over first.

We had a great day! The three big girls (Hannah, 10, Rachel, 7 and Kathryn, 5) all played outside for a good while. Meanwhile the grown-ups (plus adorable Christy) played with Numicon. When the girls came in, both Rachel and Kathryn couldn't wait to play with the materials. It was great to see them manipulate and figure out how they could use the tiles and rods. I meant to take some pictures, but we were having too much fun! 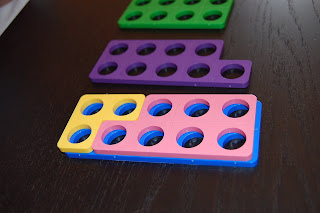 I really didn't try to sell them on Numicon (sometimes I think this blog is practically an advertisement!). Since it's so expensive, I didn't want them to spend all that money only to not be satisfied (especially since I'd sort of be to blame since I've been praising it on various Ds lists). I think Numicon sold itself.

It didn't take long for Angela to realize how different Numicon is from other math programs. Numicon focuses on helping a child build a concept image of number. This means that a child has an idea, in their "mind's eye" what, for example, is 5. Most of us, if we close our eyes, can conjure up an image of five. It might be an array such as we see on dice. It might be five fingers, it might be five objects that are groups of 2 and 3. Whatever it is, it's different for every person. You automatically know that four is one less than five, and you know that six is one more. For most people, the highest number of objects that they can easily recognize is four. Imagine if you were pouring out Aspirin tablets. If you glance down and see five tablets, you most likely have actually seen three tablets and two tablets. Your brain is so fast, it instantly can add up and tell yourself that there are five. Or, maybe the tablets are arranged so they look like a "5" on a die. You can recognize that combination too. Or, if you spilled out 7 tablets, your brain organizes them into groups of 4 and 3, or maybe 5 and 2, but you pretty much instantly know that it's "7" that are there. This is the kind of "ownership" of numbers that I want Hannah to have. I think it's really necessary to "know" numbers so well that they are recognizable by patterns (2 sets of 3 is six. Six is also one more than five. It's 4 and 2; it's one less than seven, etc). Sure, lots of arithmetic can be done by counting, and using number lines, but I want Hannah to have her own concept of each number. I want her to be able to imagine chopping off a set of "3" from "7" and know right away that it leaves "4". Yes, she can do arithmetic on paper, with a number line, or Touchmath points or an abacus. But she is just going through the motions; it's just "counting". When she has memorized math facts she hasn't been able to generalize that information to other settings (we had 4 napkins, but added 4 more, how many more napkins do we have now? If I don't use the exact wording that she's used to, she can't come up with the answer.) But she can now. It's coming, slowly, but she is really getting her own image of number.

Numicon is multi-sensory, which works really well for our children with special learning needs. It provides lots of visual input, as well as tactile learning. It's fun, and there are lots of game-like activities. It was interesting to see Kathryn's exploration with the materials. She has very clear speech for a five-year old with Down syndrome, and she was busy matching "turquoise" tiles and putting them in place on the base board. She had all the tiles out, spread over the table (that's about 80 tiles), but she could quickly determine the exact one she needed to fill a particular space. She played for a solid 40 minutes or more, exploring different ways the tiles fit together, and how to use them as puzzle pieces, dumping them out again and again. She was so busy learning and exploring, it was fun to watch her.

Rachel, a typical seven-year old, played happily with the Cuisenaire rods, making beautiful patterns in trays, arranging and sorting by length and color to make quilt-like arrays. Both girls were so engrossed in their work/play that the grownups had time to sift through the specifics of the specific kits/packages that Numicon offers.

I can only speak on my experience with Hannah; I don't know if Numicon is the arithmetic answer for all kids with Ds. But I think that anyone who is seriously looking for a supplement to potentially change their child's arithmetic experience should consider it.

And Hannah thinks that we should have more people come to look at Numicon, especially if they bring babies and playmates along! (Katie, aren't you jealous! We had a baby here!) 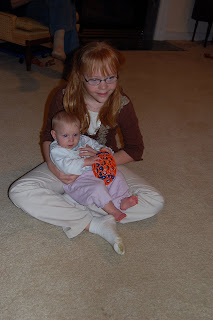 how's our baby doing? I have a picture of her in my room (the bath one) and it makes me miss her. She was so funny!

Also, I definitely know what you mean about seeing things in little groups and adding them. Since adding (and subtracting...and dividing...basically math!) is really hard for me, whenever I have to count a lot of things I do it in groups of 3!

Well Katie is ahead of me I cannot even count in groups of three and as for adding, subtracting, mutiplication and division I NEED MY CALCULATOR!!

With that said I guess I should pull out the foundation Numicon!! I REALLY NEED TO GET THE GIRLS GOING!! We need a Numicon play session SOOOOOOOOOON!! Or maybe just playtime!!

This is the last week for FH Then I am sure I will be a free woman (RIGHT!!)

I wish we could afford it. I would buy it in a minute!