Since my brain is still recovering from the exceptional food intake over the past few days, I am stealing an idea I saw on another blog. It was a "Tag! You're It" kind of thing. The task was to look at the fourth picture in the fourth picture file on the computer, and write about it (or something close to that, I think...). If you've got a blog, do a show and tell too, and leave me a comment so I can come and see what secrets your fourth file shows!

So here it is: 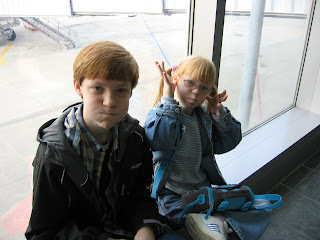 This picture was taken on New Year's Day 2006. We were in the Atlanta airport, waiting to fly to Tampa. For Christmas that year, I got my first digital camera. It was Katie's last year at home, and we wanted to do something fun together as a family, so we went on a cruise to Cozumel and Grand Cayman (and probably somewhere else too, but I've forgotten). I had already taken a nice picture of these two patient kids, so, as usual, Hannah wanted to make silly faces.

We had a great time on the cruise. Hannah went on a submarine ride, and the older kids took their first scuba lesson. We snorkeled, danced, played games, ate well (except for the last couple of days...rough seas. Eww.), and had fun!

Wow! Chris has grown so much in three years! What a young 15 year old he was! Hard to believe that two weeks after this picture was taken he started his first semester at the community college! That's kinda crazy, don't you think?

Here's the picture I took just before the one above: 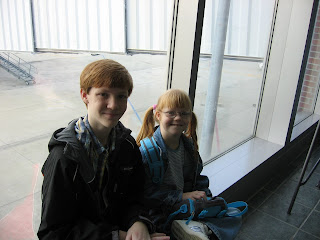 On another Chris note, I am so HAPPY to be able to say that he is currently PAIN-FREE for the first time in nine months! He's been going to a chiropractor three times a week for the past month. His residual back pain from the fractures is gone, and he's working on gentle exercises to gain more range of motion. We are so thankful for this blessing!

I hope you all have had blessings that have made your Thanksgiving holiday wonderful!
Invented by Beth at 10:30 PM