How cool is this? (unless you don't like critters...)

Chris the Nature Boy strikes again! Remember that Praying Mantis a while ago? Well, we left it in the garden and didn't see it again. But last week Hannah and I were clearing out the old plants to ready the soil for the winter. She was yanking out old marigolds and shaking the soil off the roots. The praying mantis fluttered out and sat in the grass.

So we caught it in a critter cage to keep for a day or two, so Chris could see it again. We're pretty sure it's the same one since it was practically on the same plant we put it on in October! But the weather turned cold over the weekend,and we didn't know where to set it free. So we fed it some meal worms. Over the weekend Chris did a little research on mantids, and decided to try to keep her a while. So he set up a terrarium, complete with crickets and meal worms. We were concerned because we didn't see her eat much (we knew she was a she because she has six segments to her abdomen). We misted water near her, and she drank the droplets off the glass walls. It's really cool to see her drink. Her little mandibles just pull the water to her mouth.

But this morning he came to get me to see this: 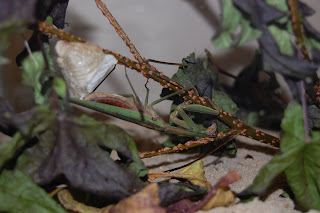 She was laying an egg case! No wonder she seemed so fat and juicy! 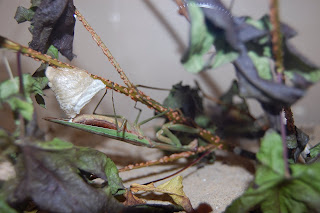 A case can hold 200-800 eggs!! Some mantises die after laying an egg case, but we don't know if this one will. She was so hungry and thirsty this afternoon. That's exactly how I felt after giving birth too! But she is so trim... that's not how it worked for me!

Here she is devouring a meal worm. Ahh... 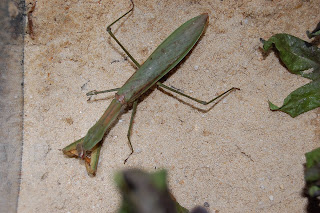 You can actually keep the egg case until the eggs hatch. We've done it a bunch of times. It's so cool when the little ones hatch. The egg case looks like it has exploded!

ooh...monster toast!! those are tasty.

that is really cool though. John was surprised that we had wild praying mantises! I guess Minnesota is too cold for them.

What a cool pic!