When Hannah was little she detested the dentist. We worked very hard with "playing dentist" to get her more comfortable with strange masked people and power tools in her mouth. It was a resounding success, and now she loves the dentist--she even wanted me to make a movie of her recent dental visit.  I'll spare you that, only giving you a quick visual aid. 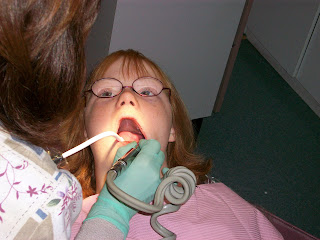 It kind of looks like she's got wide scared eyes,
but really she's concentrating on listening to what they hygenist is telling her.
Last week we had a regular dental check-up and discovered several things about her mouth. The first, and most surprising to me, was that all four of her 12 year molars have erupted. She just turned 11!

The second is that she is missing 3 adult teeth, all are premolars, two bottom ones and the upper right. (James is also missing some of these permanent teeth, but his baby teeth are still doing the job.) (So I'm blaming him.) (And he's just glad to see that she's following in his footsteps. A proud moment in every parent's life.)

The third is that her left canine and premolar are impacted. She had her upper canines pulled when she was 7 or 8 to reduce crowding, and the left one has never come in. That's because it's sideways, laying flat on top of her bicuspid. And so is the premolar.

I'm a little miffed that we didn't know this earlier....it's not like the girl hasn't been to the dentist and had x-rays before. It's not this dentist's fault, this was only our 2nd visit with him (and I don't really know if it's anyone's fault, but I think someone could have noticed missing tooth development from bitewing x-rays). I had been asking about this canine tooth for a few years now (don't forget, we move frequently, so I've had plenty of opportunity to get varying opinions). I've also been asking about braces for a while. The answer always was, "After she's done loosing teeth." Of course, she wasn't loosing teeth because there aren't any to push the deciduous teeth out!

Anyhow, off we are sent for an orthodontist consultation. Yesterday was the day. I've had two kids with braces already, so I know the drill pretty well. And Hannah had two ortho consults before they pulled the upper canines years ago due to crowding.

I should have known--the warning signs were there. When I called to set the appointment I asked if Dr K. had many patients with special needs. The answer was, "Umm, no, not too many, really." So I went on to mention that Hannah has Down syndrome, but she would be a cooperative patient.

So we arrived, and I signed her in while she was looking at the elaborate patient-funded salt water aquarium and computer gaming set-up in the waiting room (Playstation, X-Box, and something else....I don't know because we have never touched those). Can you believe there was not a single book or child-appropriate magazine in the whole place?   The receptionist got up from her post and came around to personally meet Hannah. With a hug. Ewww. That always creeps me out. Then, said receptionist turned to me and syrupily said, "She's just precious." (Don't forget we live in the South, and depending on inflection "precious" does not necessarily mean "precious". This particular "precious" had ambiguous inflection. I chose to interpret the entire thing as a woman thinking this was the right thing to do with a "retarded child". She must have seen footage of the Special Olympics in the late 1970s or something.)  I gave her a blank stare and asked if there was paperwork to fill out.

**An aside--as if you're not used to me going off on a tangent**
We have always stopped Hannah from inappropriately hugging people--those who are not close friends or family. It was difficult when she was an adorable toddler who would latch on to anyone's pants' leg if they so much as stood near her. It was awkward for all involved when I'd stop her in mid-hug and say, "Hannah, loook up at this person. Do you know this person? No. He is a stranger. You cannot hug strangers." Of course the person would say, "Oh no, she's just fine--she's adorable." Then I'd have to nicely say, "Thank you, I'm sorry, but she needs to learn proper social boundaries."

Also, our kids with Ds spend a lot of time in physical and occupational therapy. This means that adults are touching their bodies, in many places, on a regular basis, generally without asking permission. It is hard to learn what is an appropriate touch and what is not when there are mixed messages about who can touch and who can't.

So, I figured that if we were going to use this orthodonist I'd need to do some educating of the staff. Especially when the assistant also hugged Hannah on the way back to get pictures of her mouth.

At least the doctor did not hug her, but maybe that was because Hannah was reclining in the chair by then. It was all high tech, and gave me the feeling that they were trying to entertain us, rather than getting to know us.

Omitting boring details of the exam, Dr. K's opinion was that we could leave in the baby teeth and she'd probably need oral surgery to extract a tooth or two so they could access the impacted teeth. Braces now, as well, and we can take the molds right now too! All for the affordable sum of $4900! What a deal! I could have my child's personal space invaded as a bonus! And a free t-shirt! Throw in some condescension, and it seems to be a bargain I can resist.

I was not feelin' the love nor liking the sales technique. We're not going back. It's time for a second, third or fourth opinion. I don't disagree with the plan of care, but we need an office that understands that Hannah just needs a little more time and patience--not a circus of revolving faces and equipment.
I've asked for recommendations from our local Down syndrome goup, and hopefully we'll find a good match--someone who will take the time to explain things to Hannah.   I want someone who will respect Hannah.  And respect my input.
***ADDENDUM***
I called our dentist and said that I didn't think Dr K was a good fit for us.  He gave me two more names, one he highly recommended.  He didn't give me this name at first because the office is about 20-25 minutes away (near Courthouse and Midlo, for the local among you), and he didn't want to make us drive extra distance.   I am hopeful about this one--he's had oral surgery training as well, plus he did extra training for special needs individuals.

Hey, at least this one didn't ask who her plastic surgeon was!

I love your tangents.

I always love the "she's precious" comments. And the hugs....what's with that? Kinda weird.

Hope you find a good dr and office staff!

I quite enjoy reading your tangents! I'm learning a lot from them. I agree w/ you- the hugs are not cool. I really don't get people sometimes. I'm glad that you are looking into other offices. I used to work at an Oral surgery office if you need a recommendation.

I hope the next orthodontist is a better fit. I love the tangent part. Goldie has a new fascination with hugging strange men. Only men.

I appreciate the tangents. We all have them, and it's nice to see the thoughts behind the stories.

WOW It seems there are lots of Orthos around like Butterfloss but along with the bargain you get FREE roller skating parties (he rents the entire place for his patients only!)

I hope the next one is a perfect fit.... Then I would call Ms. Precious and let her know I was sending her some material her and he office might find helpful in the future! Maybe even Emma's Gifts"

Hi. I found your blog through Lovin Mama's blog "Livin For the Love". And I'm glad I did. My 19-month old son, Matthew, was diagnosed with Down syndrome within the week after he was born. I'm always looking out for other moms who have been in the mommy gig longer than I have, hoping I can learn a thing or two and peek into the future, so-to-speak. I really enjoyed reading this post, especially the tangents. Good insight. Coincidentally, I'm in the process of switching Pediatric ENT doctors because I didn't like the previous one's bedside manner so much. So I relate with you on needing to find a new ortho for Hannah. It seems like it's usually best to go to a doctor/ dentist/ medical professional who sees a fair number of kids with special needs. Anyway, I'm sorry I'm rambling. Oh, I hope you don't mind that I took the liberty of adding your blog to my blogroll at "Bill and Ria" in the 9 - 12 year old age range. (I have it organized by age). If you would prefer not to be on my blogroll, please let me know.
Thanks!

My blog: Bill and Ria