This is the year of strange and bizarre medical issues... 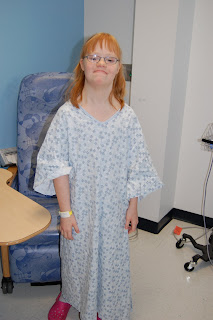 This is the year of strange and bizarre medical issues. They're not all strange, if you're familiar with Trisomy 21, but Hannah has not been the only one with odd medical goings-on.

Here's the short list: (it turns out that this is not very short....are you surprised?)
January: Hannah has check-up with Very Thorough (and amazing) new pediatrician. We follow up with a new ENT, and repeat x-rays for atlanto-axial instability (it is recommended to have x-rays in preschool years, and then again in adolescence). ENT schedules tonsillectomy and adenoidectomy due to large size and because of moderate-severe obstructive and central apneas. X-rays come back with borderline AAI (which is a wider-than-normal spacing between the top two vertebrae, risking pinching of the spinal cord). No gymnastics, horseback riding or skiing for Hannah.

My father slips on ice and crushes a lumbar vertebra. Is eventually scheduled for surgery.

February: Dad's surgery is successful in stabilizing his spine, however he develops a blood clot that threatening his spinal cord. Must have neurosurgery, which happens on the same day as Hannah's T&A surgery. Both patients come through successfully. Though, with Hannah, there is a pharmaceutical error which results in Hannah having no pain medication for the first 4 days post-op. A long and torturous recovery for her. Dad has physical therapy and eventually recovers most range of motion and ability.

March: Hannah is finally cleared from the ENT. The next day, Chris and Hannah were in a single car crash (bad weather, no merge lane, young driver). Hannah has abrasions and cuts to the head and face. Chris has broken two vertebrae (no spinal cord involvement, Hallelujah!), which turns his spring break into a week-long hospital stay. He is in a torso brace for the next 2 months. Kate has "active lymph nodes", which give us all a scare, but turns out to be caused by a latent case of Mono. No wonder she naps at college! 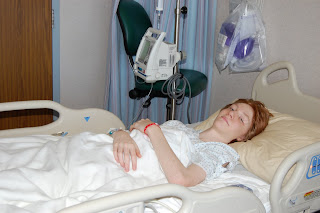 April: For Hannah's 10th birthday we take her to Disney World. My Dad comes to care for Chris (great idea, right? Two guys with broken backs!!). At Disney, Hannah comes down with a severe GI bug on the second day. (I'm talking SEVERE. Vomiting upwards of 30 times and diapers-for-a-week severe.) We spend 3 days at Florida Children's Hospital. During the last two days of vacation, James and I take turns with the same stomach flu. Hannah thinks the hospital is almost as much fun as Disney World--she loves doctors that much! 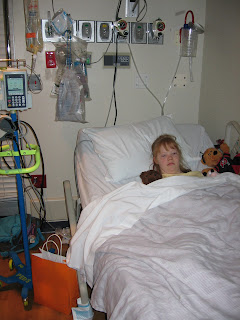 May: Chris is diagnosed with premature osteoporosis. There actually isn't a term for what he has, because osteoporosis by definition, is for people over 40. Basically, he has a mild brittle bone disease. Hence, the broken back (now we know why he broke his femur 2 years ago, which ended his competitive ice skating career).

June: Hannah has unexplained hip/thigh pain, only after sitting for prolongued periods (car trips 1 hour+). She is unable to stand straight up while getting out of the car. The pain resolves within 10-15 minutes after changing positions, but becomes more frequent over the next month or two. Hannah also has a follow-up sleep study to see if she still has apnea.

August: Yes, Hannah still has apnea. ENT doesn't know what to do about central apnea, or what could be still obstructing the respiratory pathway, so refers us to a neurologist to be seen in October. Her leg pain is less frequent. Maybe only once every 3 weeks or so.

September/October: Neurologist cancels appointment because of insurance issues. We head to back to Very Thorough Pediatrician, to see if she will prescribe a bi-pap machine, or whether we need more testing. Upon examination, Dr. M asks if Hannah has had any joint pain. Well...yes, in her left hip. I present my two theories on the hip pain: either it is hip subluxation (femoral neck falling out of the socket, then pain as it works its way back in), or it is because of Hannah's pronated feet. She has worn AFOs (braces for her ankles/feet) since she was 18 months old, but at the end of last year we switched to specialized inserts so Hannah could have more independence with getting her shoes on. Hannah liked the inserts at first, but in the past months had been avoiding them because they "hurt her toes". Dr M likes both theories, but also adds that joint pain can also be a symptom of disordered sleep.

We leave after 2.5 hours with orders for hip x-rays, referrals to pediatric orthopedist and neurology. X-rays show no evidence of damaged hip socket, so if it is hip subluxation, it isn't causing any damage to the joint at this point. Specialist appts are in November.

My mother also recently fell down and is dealing with an injury to her coccyx. Initial x-rays are clear, but the pain remains.

You forgot the the house issues, possible allergies and not feeling well........ Oh and the fact that all this happened right after YOU LEFT US!!

However rumor has it there are several houses close by for sale (even some right in our little neighborhood)!! HINT HINT BIG HINT..... I am sure James wouldn't mind the commute..... ;-}

PS: But thankful and very happy that so far the issues have resolved and not been too serious and praying it stays that way!!

Especially keeping Mamma and Hannah in our hearts, thoughts and prayers. xoxoxo Your Brat :-D

Wow, you guys HAVE been thru a lot. I'm anxious to see what they find out about Hannah. Don't forget to post that. HUGS