Well I suppose is wasn't any longer than the previous 24 hours, but it sure felt like it! There is a long post to be written at some point, covering the salient topics of apnea, hip subluxation, neurology, AAI, AFOs and bad attitude. But this isn't the time! No emergencies. You'll have to be satisfied for now that, for the most part, Hannah is healthy enough. No big surprises, no new medical discoveries after a full 4.5 hours of waiting rooms, examination rooms (ours was cool--hand painted space theme, complete with glow-in-the-dark paint PLUS a black light to see it at maximum glowage!), imaging centers and invoices.

Instead of posting about today's events, I'm going back in time, back to the day of the mushrooms...it ended up being The Day of the Creatures. (Was that just yesterday???)

We have bemoaning the lack of wild life in our yard and neighborhood (aside from invisible deer that eat watermelon). Chris, our resident naturalist, has always had a gift of finding or noticing animals and interesting plants. A walk on a beach might include a casual glance down, with Chris finding a live sand dollar. Or sea turtles hatching. Or a toadfish in the muck. A stroll through the woods will bring a tree frog or an anole. Tadpoles, frogs, insects, reptiles, they all seem to appear when Chris is outside! Even when he was on a Sierra Club trip doing environmental work removing invasive plants in a Florida State Park. The entire team of volunteers canvassed the forest to find an endangered flower specimen. Chris was the one who finally found it.

So, a few weeks ago, he decided he'd go out and Find a Creature. But, apparently our neighborhood is barren. He's always on the lookout, but I think someone tipped off the wildlife. He wanted to find something interesting to show Hannah. He came in without even a bug.

However, the spell has been broken--there really is life in the yard, besides the Japanese Beetles that ate the basil! 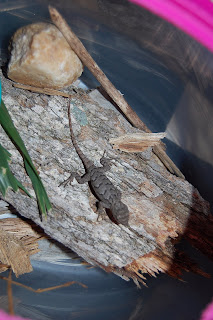 This Eastern Fence Lizard was sunning himself on a rock. We kept him overnight with a tasty little grasshopper (who, eluding the lizard, was also happily released this afternoon). He was a young lizard, only about 2 inches long. 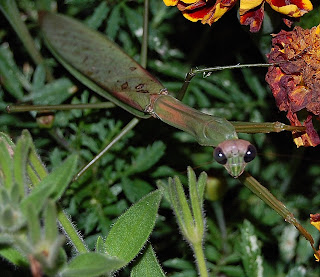 Then there was this praying mantis in the garden. He was about six inches long!

So now the animalia have made themselves apparent. We'll see what else comes Chris's way.

I bet you thought Chris' red hair was from the gene pool...... I am thinking that his red hair mens he is King of the animal world!! A lion in disguise!

I bet Rachel would love for him to hunt down and remove every spider that lives or comes within 20 feet of her!

Oh and I want to put in a wish list.... If Chris happens to find a baby groun hog he/she can live here!

PS: I wasn't even thinking about the 31st HOLY TALIDO BATMAN! I better get creative.