In Which Dolly Goes AWOL

Last fall at William and Mary's family weekend Hannah played a game and won a goldfish. It was a tiny meek fish. All of our other fish had died, so while we were happy to have a new resident, I was afraid that she wouldn't stay with us for long.
Hannah named her Dolly. She loved her, and Dolly survived.
And the other day it was time to clean her bowl. Dolly's always been quite well behaved. But this time she got a bee in her bonnet and while I was getting her temporary bowl filled with water, she decided to make a run for it.
She jumped out of her bowl and landed in the kitchen sink!
Fortunately it was the sink without the disposal.
Dolly landed right in the drain. She was small enough to slip through it, but somehow she didn't.
I reached in the drain, but I couldn't get her. So I got a spoon, and scooped her up and plopped her in the water.
She was injured. The lower half of her tail was missing, her dorsal fin was ripped, and she lost chunks of scales on both sides of her body. She was bruised as well.
We figured she was a goner.
But, nope!
Here she is a couple of days later--look! 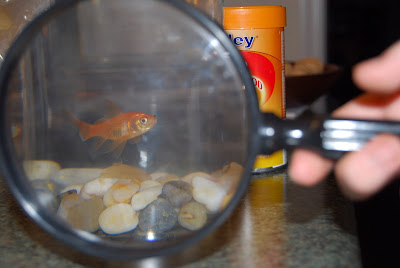 Her tail is already starting to grow back. Her dorsal fin looks great. She still is missing scales, but so far so good!
p.s. Go visit Lois--she's going to follow in Dolly's footsteps ripples and kick some tail.
Invented by Beth at 8:30 PM

the title of this one cracked me up! GO DOLLY!! you're a real feisty fish! :)

She's a survivor, that Dolly.

What a feisty little Dolly you have!

Glad she didn't slip down the sink!