We spent Friday enjoying the warmer weather (snow disappeared quickly!), preparing for a dinner party (Sat night) and tidying up. Hannah's chores included dusting. She really likes to dust, which is good, since we always have lots of it!
While dusting the piano she said, "I'm really good at dusting. That's because I'm Hannah Duston!!" Ha! Yes, her middle name is Duston. It's a family name. Actually, she's named after a famous Hannah Duston (sometimes spelled Dustin). Hannah Duston was the first woman in North America to have a statue erected in her honor. 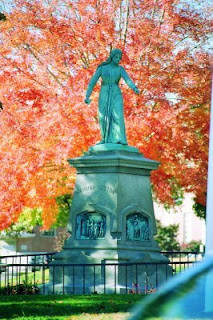 I have not yet told Nan the origin of her name. It is a rather colorful story. And brutal. And quite politically incorrect.

When we were awaiting Hannah's birth, there was great drama between Kate and Chris. Kate was hoping for a sister, and Chris was hoping for a brother. James and I always liked to be surprised at the birth of our children, but for the first time, for the sake of a peaceful entry into siblinghood, we decided to find out the gender via ultrasound. Upon learning that he was expecting another sister, Chris was as devastated as a seven-year old can be. As a consolation prize, we decided to let him come up with his baby sister's name (reserving parental veto power). His first choice was Guenivere. Which was promptly vetoed. He did some research and found that the Americanized version of Guenivere is Jennifer. Which was also vetoed (nothing personal Jen, Jenny, Jennifer, et al).

Eventually I showed him some of our family tree, and told him an abridged story about Hannah Duston. It's filled with death, bravery, scalping, daring escape and, eventually, reunion. What more could a boy want? The name was chosen. 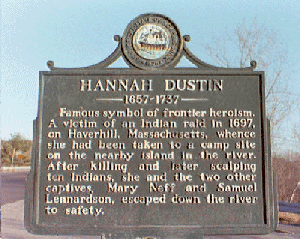 You can read the Wikipedia version here. Also, I see on Wiki, for those of you following along, that there is reference to Hannah Duston's mother as a Webster (see my earlier post about Noah and Daniel Webster).

So the original Hannah Duston was a woman who, after having her newborn child killed in front of her, was taken captive by natives. She escaped by killing and scalping her captors, and made her way back to her family. She was a woman who met her challenges. Just like my girl. We didn't know our Hannah was going to have as many challenges as she does. But she's got a fighting spirit that has carried her through many medical and developmental obstacles. Well named, well loved. 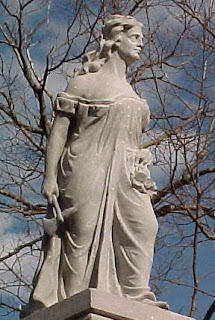 But watch out for that tomahawk.

One thing I never noticed before is that Hannah Duston was captured by the Indians on March 14th. That's mighty close to our Hannah's birthday--March 13th.
Invented by Beth at 1:45 PM

What an awesome story! Now I know who the first American woman to have a statue named after is and just how deserved it was. She was one tough cookie for sure, definitely a namesake that Hannah seems to be living up to. Thanks for sharing that!

Very interesting. My mom just read this to me. She is impressed.

so cool! your family gets more and more interesting! and it's a perfect name because she really IS a great duster! :D

Nevermind my earlier comment about not being directed to this story by the link!

Wow, it is quite interesting! I love that Chris was able to agree on Hannah's namesake. :)

The story is gruesome just by your description. I don't know if I have the wherewithal to read more! LOL!

At any rate, Hannah Duston was a very courageous woman!

who knew that i was related to her!