Hannah has a difficult time with spelling. Over the years, I have used many of the more common techniques with her--having her copy them, write them 5 times, recite them, etc. I tried various spelling lists, Dolch words, word families, and high interest words. We were both frustrated. Then one day I overheard a neurodevelopmentalist describe how her son learned spelling words. It's a simple technique that Hannah enjoys and that doesn't irritate me (VERY IMPORTANT FACTOR--keep Mommy happy. Many times I am too impatient).

I already knew that I needed to use words that matched her short-term memory capability (also known as Digit Span). Hannah's current digit span is not quite a solid 5. That means she can only reliably keep four bits of information in her head at a time. She can hold five bits, but not on a consistent basis. Most typically developing kids her age have a digit span of 7 (so does the average American citizen--hence the seven digit phone number). So her spelling words are primarily 4-letter words, with a few "challenge words" with five or six letters.

I make flashcards on index cards (clearly written in Sharpie marker--red works best for younger kids; Hannah uses black now). I hold up the card, say the word, then spell it (visual and auditory input). She then says it and spells it while looking at it. I quickly flip it down, and she repeats the spelling. She usually can repeat without much trouble. Occasionally she needs to repeat the word on the first day or two. We do the cards for 4 days or so (twice a day would be twice as fast, but that just isn't going to happen in our house). On the day before I test her, I will have her practice writing the words once, immediately after she repeats the spelling. Sometimes I will let her spell the words with letter tiles (like Scrabble) as well, to keep it interesting. 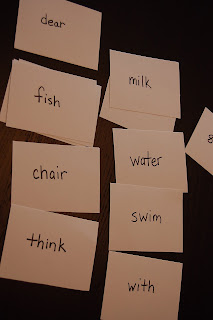 The last day is her test. I say the word (no visual this time). She usually repeats the word, spells it out loud, and then writes it. This way I can tell if she's having trouble with penmanship, or if she actually has difficulty with the spelling.

If she misses any words, that card stays in the next week's pile. We do 10 cards a week. Hannah is getting good at "clumping", to bridge her digit span to 5 and 6. Usually these words have repeated letters, like "school". Or, I'll use a word like "chair", and really, that ends up being a two-digit word, since she already knows how to spell "air" (it's part of her long-term memory now), and she knows the "ch" digraph. We also use clapping to make a rhythm for the longer words, and also finger spelling (sign language) as another method to get the spelling ingrained in her brain.

Now, all this would be great if we actually did schoolwork every day. But, being relaxed, eclectic, barely-a-step-beyond-unschoolers, we feel so very accomplished when we get three days of school work in per week. Our schedule this year is not as interrupted as some years, so we can even get four days a week if we are energetic. It's not that we don't learn things on the other days, we just don't do formal sit-down work at the table.
Invented by Beth at 12:28 AM

Thanks, Beth, for all this great spelling info!!!

You are giving so much to all of us who walk a step behind you. Tarenne actually for some reason does pretty well w/spellng.