Well, I don't want to appear to be an education snob, but there are some things that I thought were generally well known. Sort of, well, like, y'know....I'm not expecting any American to have substantial geographical knowledge. Nor am I expecting Americans to really throughly follow foreign affairs beyond current critical issues. Yes, there are some who would decry my lack of insight into economic policy or my minimal interest in C-SPAN. I certainly don't know it all, and really, I don't want to know it all. I like living in my little bubble. But it sort of scares me when I realize that so many people know even less than I do

Chris has a new T-shirt: 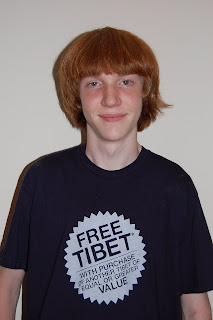 He's worn it a few times and so far nobody has had any comment. We were discussing this a few nights ago. I thought maybe that people hadn't read the entire shirt, so maybe they thought he was a thoughtful supporter of Tibet (which, he actually might be). But he also has quite a sense of humor.

He came home from school today (he has been attending the community college for a few years now, waiting to be old enough to be released from this prison we call "childhood"). He told me that he found out why nobody ever laughed at his T-shirt. Two people asked him what a "Tibet" was.

Oh man - that scares me ;) Love your blog - your children are beautiful! Thanks for stopping by and visiting Brady and I :) I can tell your Hannah is going to be an inspiration to us :)