Is it, or isn't it? Clinical Trial: Rivastigmine

Today was the beginning of the larger dose of "placebo".   The dosing had been 0.75 ml twice a day.   Today the morning dose was 1.5 ml, and the evening dose is the regular 0.75 ml.  We're basically increasing her dose by 50%

At 9 a.m. Hannah had her dosage, and for breakfast had a little fruit salad, vitamins (with applesauce) and some milk. She was working on "a big art project", so I left her to her own devices to eat, drink and create.

A couple hours later she came to me and said she didn't feel well.  I was surprised to find that she had only eaten a few bites of fruit and barely touched her milk.  We cuddled up on my bed and chatted a bit.  It was a chilly morning, so cozying up under a blanket was a sweet way to comfort her and sneak some lovin' on my big teen-aged girl.

After a bit she asked for some soup.  So I fixed some for her. She came to the kitchen to eat, but just stood there a minute, made a little gagging sound and said, "I'm going to throw up."  and scurried to the sink. Success. But no fussing at all.

We opted to watch some home movies instead of eating.  (Oh my goodness, she was so cute and little in those movies!!). Hannah was giggling a bit at the movies, and eventually wanted to try the soup. She had a few spoonfuls and decided that was enough.  I suggested a bath.  She took a long one and really perked up.

She was hungry afterwards, so she had soup and some hard-boiled eggs. Back on track 100%. So much so that she was bouncing out the door with James to go see the local professional soccer game this evening.

So, since Hannah has not thrown up in three years (almost to the day, thank you Disney World), and she hasn't been around anyone with a stomach bug, nor am I familiar with any stomach flu that lasts just 5 hours, I am left with the idea that we, Ladies and Gentlemen, have a Side Effect.

This leads us to the high likelihood that she's on Rivastigmine, and not a placebo.

Another side effect of Rivastigmine, is increased language and memory ability. We have been noticing these side effects over the past couple of months, but as I said before, the changes are nuanced. According to Kate, who only sees and hears Hannah from a distance, she's been convinced for months.

The first thing I noticed was that when we were doing Hannah's Language Arts school work. I read a passage of children's literature out loud (working on auditory processing and memory). She listens and then later verbally answers questions about the passage in complete sentences. She never, ever got all the answers correct. I always had to repeat sections of the passage to help her answer the question. Some times I'd have to repeat the sentences four or five times before she'd remember what happened to which character. It was really frustrating for both of us.

We hadn't done that particular part of her homeschooling in about a month. (Have I told you how relaxed I am about homeschooling?  Maybe that's just "lax".) So when she had been on the "placebo" for about a month we got back into the swing of things.  I couldn't believe it.  She answered every single question correctly on the first reading!  And the same thing the next day. And subsequent days. She missed a couple here and there, but it wasn't as if I had to repeat and repeat sections of the story.

Here's another scenario: Today, I mentioned that Hannah's friend Sarah was coming over to play with her on Wednesday (AKA babysit).  I was going to the Picasso exhibit at our local art museum with Catherine (Lois's mom, who, by the way, is forging her way down a long road of grief in a very honorable fashion).

To set the stage further I cannot recall ever mentioning the words "Middle School" nor "Clover Hill". She has seen signs that say these words in front of various schools, but we have never discussed what grades were in which kind of school, nor has she ever entered one of these schools.  Also, please remember that Hannah is a lousy speller, and I don't know that she's ever seen Catherine's name written anywhere.

Hannah:  Oh, I have a friend named Catherine, but she spells it with a "K".

Me, surprised:  How do you know her?

Hannah:  She was in my class.

Me, thinking:  Her dance class?  Art class? Theater class?  Wonder where this Katherine is and why haven't I heard of her before?
Me:  What class?

Me:  Which Middle School Class?

Hannah:  The one at Clover Hill School.

Me:  I didn't know you went to Clover Hill School


Hannah:  Oh yeah, that was when I was with my other mother.  Her name was Daphne.

I didn't see anything except my girl coming up with ideas, memories and imagination, and a spark of something new. (BTW, we do have a Clover Hill High School in town.)   Where did she come up with the Catherine with a "K" idea?  How did she know my Catherine, or even that some Catherines use a "C"?  She has no friends named C/Katherine.   Where did this idea of another mother come from?  She has several friends who are adopted, but we haven't ever said much about the birth mothers other than they weren't able to raise the baby.   What is her brain up to?

Let me assure you as well, she is still 100% Hannah, complete with adolescent mood swings strategically aimed towards me.  Bring it on, girl. 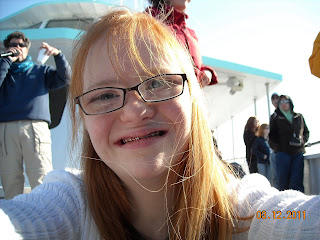 Now we await Dr. Capone's return phone call to see what to do next.  The options include upping her dosage more gradually, and/or giving the larger dose at bed time.

To read previous posts about the research study, you can begin with my post Baltimore and Research Studies, and then follow the link at the end of each post to get to the next in the sequence.

Okay, I'm lost. Could you fill me in on what trial she is on? Does Hannah still take Nutrivene D? If so, for how many years? I'm still on the fence about it all but I'm very curious. Bennett is still so young- will be 2 in May but I'm thinking for down the road possibly. Thanks!

Fascinating reading, Beth! It's wonderful that you're seeing positive changes in Hannah's language and memory abilities, whether it's because of the Rivastigmine or just a normal leap in development. I laughed at Daphne, the other mother. :) Thanks for the update!

And, if I could just add, her DANCE knowledge, technique and performance skills have SKY ROCKETED this year!! I am so STINKING proud of her!!

I'm sitting on the edge of my seat reading every time you post about this study! I have a question. Do I remember correctly that you took Hanna off of ginkgo for this study? If you did, do you think any changes would more subtle because she was coming off of the ginkgo?

I hope you find away to work around the upset stomach side effect. Thanks for sharing Hannah's experience with us!

Wow Beth...amazing! All sounds wonderful. Hope the dreaded SE go away.
I hv Rob on the CMF with the Prozac and Gingko, good changes but not anything like you are describing here...wonder if Teresa Cody knows about this? Def.gonna look into it.
Blessings to you and Han.! U go girl!

I'm so glad you are posting all this info on the research. I think it is all fascinating!