Our trip to Baltimore was short but sweet and effective.  We drove up on Thursday and spent some time at the Inner Harbor. 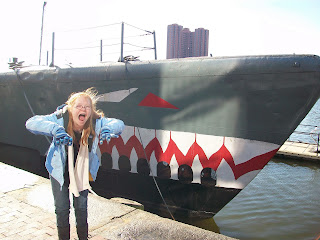 We all enjoyed the National Aquarium.   Hannah was particularly interested in the zebra shark (which actually was spotted--it's born striped, then loses some of the pigment as it gets older). Chris and I were fascinated with the chambered nautilus--neither of us had ever seen one before.   Very interesting animal, related to the octopus.

(about 5 inches in diameter) 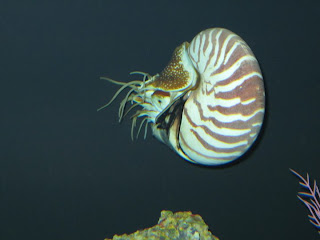 We ate at the Hard Rock Cafe, and Hannah was thrilled with the Elvis memorabilia they had (she recently developed a crush on him--she gets all giggly when she talks about him). 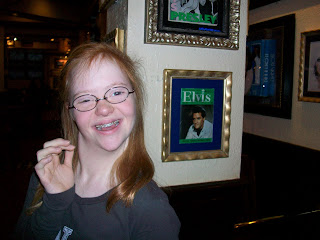 Friday we were up and checked out early to get to our appointment at Kennedy Krieger.   It's an interesting place.  I didn't know they had a school for kids with disabilities.

First on the agenda was Hannah's language screening at the Neuropsychology Department.  A psychologist assessed her language skills.  It was just an expressive one-word picture vocabulary test.  They need to know that the subject (Hannah) would be able to participate in the more extensive language and memory testing during the study.   After that, we went to meet Dr Capone. Hannah's first words to him were, "What's up, Doc?".

Dr Capone went over some points of the study and gave Hannah a general physical.   He is a good guy--not too overly academic with us (though it wouldn't have bothered me...), but clearly knows his stuff.

After that we went through the maze of urban hospital hallways to get bloodwork and an EKG.   Hannah has been totally brainwashed by me to be interested in the blood draw process.  She smiled through the whole procedure, telling her Jessie doll all the pertinent points--alcohol wipe, tourniquet, butterfly needle ("Oh, that's my favorite kind of needle, Jessie!"), remembering to ask for paper tape (Hannah detests having band-aids removed), counting how many vials of blood they needed (four), and how to hold the gauze after the draw was complete.

She was apprehensive of the EKG.   She doesn't like adhesive things (band-aids, electrode stickers, etc).  She was quite worried, so I comforted her a bit, and then went to no-nonsense mode.   Hannah was only afraid of the removal of the stickers.  I told Hannah that we'd use some of those adhesive removal wipes to help them come off easily, like we used at her latest sleep study.  Then the tech said they didn't have any of those.  Not good.  Yes good: a new kind of sticky! They came right off with Hannah hardly noticing!

We finished the intake in record time--they estimated 4-6 hours, but we were done in 3.5!   Zippy!  We headed for home, avoiding the Washington DC rush hour traffic (three-day weekend traffic? No thanks!).

Here's the chart of what happens when.  We'll be heading back in early February for our Baseline visit. 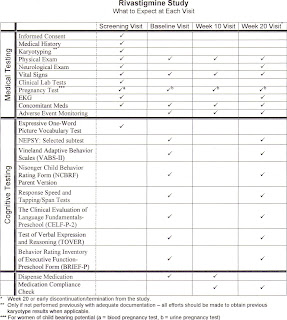 A few things that were of note:

1. The Rivastigmine (rivah-stig-meen) Study is also being conducted by Duke University.  Apparently Duke didn't have it's funding lined up as well as Kennedy Krieger (KK), so they have not even begun to recruit subjects.  Dr C. thought Duke was getting more focused on this study, so hopefully they would be up and running in the next several months.

This study began in late 2009. Four subjects have completed the study.  Another is in progress. Hannah is officially the 6th subject.   WHAT??   Don't you think that's crazy?  This is ridiculous!  This is extremely relevant research, with big implications.  What's up with the Down syndrome community?  What's up with the advertising on the part of the hospitals that are running the study?   Why did it take over a year for me to even hear an inkling of this study?  I'm pretty active in keeping up with what is going on scientifically, but I never heard of this study until I saw an email posting last month from the DSANV (Northern Virginia Ds group).   There is a posting on the NDSS research webpage, but it's rather cryptic and only lists Duke, with a phone number.  KK has the study listed under Dr. Capone's bio. It could be advertised much more efficiently.

If we, as a community, want progress, we need to participate to make that progress.   I encourage you parents to do your homework.  Please participate in research. The scientists need subjects. Hardly any of the research studies involve any invasive medications or supplements. The majority are about language skills, family resiliency, social communication, etc. Most of them are surveys. Go to the NDSS Current Studies page and see how which ones you can do--it's easy--just an online questionnaire in most cases. There might be a study near where you live!

Hannah has participated in at least 8 studies that I can remember.   She is in an ongoing communication study from Chapel Hill (North Carolina).   The researchers come to our house annually to test Hannah's language skills.  She has been in other language studies from Old Dominion University (how reading skills affect language ability), and Hampton University (VA) for graduate student practicals. She's been in nutritional studies looking at one or more vitamin/supplement absorption.    I'm not being a show-off--I'm just saying that there are many options out there for you and your child to participate.   It's not painful.

I feel that it is imperative to participate. The Buddy Walk on Washington is coming up soon.  We'll be asking our government to provide more funding for Down syndrome research.   Currently the NIH budget for Down syndrome is woefully behind nearly every other condition or ailment--particularly so when you look at the population numbers.   We are making progress in addressing the financial disparity, but if nobody participates in the studies, then we will not make progress.

Stepping down, off my soapbox....

2.  Once we're done with the study, we will be able to get a prescription for Rivastigmine if we decide it's something we want for Hannah.

3. The 2006 Rivastigmine study can be read here.  If you're not familiar with scientific publications, it's going to be difficult to read.  At least give it a try--the introduction is probably the easiest to understand. Then take a look at page 761, Table 3.   Look at those gains in language and memory!  The most remarkable result is that in four months of medication, the subjects averaged 27 months of memory gain!!!  Yowza!

4. Dr Capone thinks that Sleep is the next big item on the Down syndrome research menu.  And Vitamin D absorption seems to be poorly manufactured in the DS metabolism.    Next time your child has blood work, ask for a Vitamin D level as well--or assume, like the rest of the population, that kids with Ds are just as likely as to be part of the epidemic of Vitamin D deficiency.  We use this.    And also get a sleep study!!!

Read more about our second visit to Kennedy Krieger here.
Invented by Beth at 10:30 AM

As you know, Kevin and I are newbie parents and you have me fired up about being a part of research studies. I'm going to see what is out here in Dallas.

How did you find out about the study? What age is the Rivastigmine targeted at? We've been able to participate in several studies with the Emory Down syndrome clinic and Chase is not yet even two. I figure even if it doesn't personally help Chase, it is bound to help the DS community at large. I think you're right that the people conducting the studies need to advertise better though!!

I check periodically at clinicaltrials.gov Some interesting ones on there. One looks like a good excuse to travel to France. LOL! I keep hoping for something in Pittsburgh until the littles are old enough to travel farther.

Thanks for the info on how to find more studies.

I am sooooooo interested to see how Hannah does with this. We will be watching this one closely, not just because of Hannah, but because of a strong family history of Alheimer's +Christopher's brain damage.

He has actually participated in quite a few studies. He was one of the first babies in the U.S. to receive Nitric/Helium to "float" oxygen into his lungs after heart surgery. I absolutely believe that is what saved him from having to go on ECHMO. He has also participated in a pulse oximeter study, thyroid, a genetic study from Kennedy Kreiger having to do with the 21st Chromosome and Heart Defects, another genetic study regarding polycystic kidney disease (He has 18 of the 21 markers for PKD but does NOT have true PKD!) . I think that is it.

We have to watch what we are allowed to be in as all of his other issues can sometimes skew the results. :(

Many times, as in the case with the study that we were in with KK, they will send the info for your doctor to fill out and to get a blood sample. You just send it back and that is it. We just added it on to a regular appointment - so we didn't have to travel cross country to participate. If you are interested in a study, it might be worth a call or e-mail to see if they will do something like this. :)

whew, sounds busy but well worth it. Can't wait to see how this unfolds.

Excellent Trip! Glad to hear that Hannah will be participating in the trial. Thank you for helping our DS community! (Also, I like that submarine!)

This is wonderful information, and I'm hoping you are successful at stirring up interest. We first must fix our government spending, and then there might have more money available to devote to great causes like this. GO GIRL!

Love the pics of Hannah!

Subhan Allah! I'm glad the bird did well. I had my medical appt today and probably did worse at the blood draw than she did! can't wait to see you TOMORROW insha'allah!!
Love K