We had a great time on vacation!  The week flew past, as it always does, and the weather was perfect.   We managed to avoid sunburning, which was especially good with our brood of redheads.
Making a home for hermit crabs 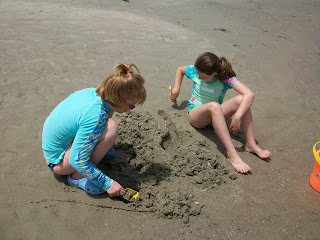 I think my favorite part of the week was that Hannah and Shea got along perfectly the entire week.   You know how when kids spend lots of time together, how they can get snippy with each other?  Hannah is not exactly the easiest person to live with...she can be moody and stubborn.  But, even with sharing a bedroom and being together 24 hours a day, both girls did very well.    I think that part of the reason was that Shea figured out that she can actually be the leader in the relationship.   Since Hannah is usually taller than most of her friends (she's 5'1" now), and many of her friends are a year or two younger than she is, they tend to let her take the lead.   If Hannah thinks she's in charge, then she'll run with it, and boss her friends around.   This is no fun for anyone.    But Shea discovered that if she offered choices to Hannah, and had Hannah agree to what they were going to play, then Hannah would keep her part of the bargain.  Shea was always considerate of Hannah's input as well.   It worked out beautifully, and they are both excited to see each other again soon (we're visiting Charlotte, NC in a couple weeks).
One exciting aspect of the week was that the skate Chris spotted turned out to be a stingray!   Every day there were schools of rays riding the waves.   In 14 years of being at the same beach, more or less during the same time of year, we had never seen stingrays.   It was impressive to see 20-30 stingrays cresting along with the waves (right where we were body surfing!).   It kept us in the shallows quite a bit (ya think???).  I figured that the rays would probably not be a problem, since we'd never heard of anyone getting hurt by them in the area, but we weren't going to take any chances.
I'll get some more pictures up soon, but now we're focusing on getting Chris ready for his trip to St Croix!   My father is taking him on a Graduation Trip where they'll both be scuba diving for a week and then exploring Puerto Rico.   This should be a great adventure (said with trepidation). (More on my Dad's unusually bizarre predicaments in which he finds himself later.  He's sort of a walking Murphy's Law.)
Invented by Beth at 9:30 AM

glad to hear you had a good time. I love all the photos, so beautiful.

Sounds like you had a good time. Welcome home!

It sounds like you had a great vacation! I'm glad the weather was so nice for you. That beach looks great!

It's so great that Hannah and Shea are such good friends. I often wonder what Joel will be like when he is older and who he will be friends with.

It sounds like you had a great vacation. I love the beach!

I can definitely relate to having a child taller than all her peers. Taylor has always been in the 99 percentile when it comes to height since birth. Right now she is 6 feet tall and will be 20 in August. So much for putting things out of her reach. *laughs*

Sounds like you had a wonderful time! That is so incredible that you got to see stingrays!