Yesterday we finally got to see the neurologist, Dr. David Leszczyszyn (say that three times fast. Or, better yet, just say it once. I'd like to hear it!). He specializes in sleep disorders in children. Let's see...I think we started on this path last February (actually it's almost been three years)! It took a surgery (T&A), a sleep study, and several other doctors visits to get this far. Hannah has central and obstructive apnea. She is an extremely restless sleeper--she sits, walks and talks in her sleep and never stays in one position for very long. Nobody wants to be in the same room with her at night!

Hannah is scheduled for another sleep study later this month. They'll be giving a CPAP machine a test drive to see if Hannah will tolerate it (she will if a doctor tells her she has to!). 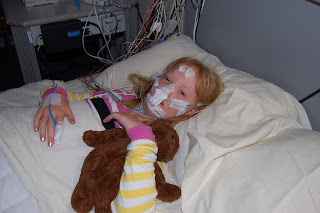 (June 2008, sleep study)
Hannah really doesn't mind the actual sleep study, it's getting off the sticky stuff that they use for the EKG leads that really bothers her.

From my point of view, the worst thing about sleep studies is that I get to sleep on one of those "comfortable" fold-out vinyl chairs. And get approximately 4.5 hours of sleep. You'd think that they'd encourage sleep at a sleep lab! The poor technologist works all night, coming in and out of the room to adjust wires and leads. Then he wants to go home in the morning! At 6 a.m.! All I want to do is sleep a couple more hours. Instead, while it's still dark out, we have to unhook the 20+ wires and take off the O2 and CO2 monitors, pulse oximeter (Nan's favorite--she likes to pretend she has a glowing finger like E.T. "I'll be riiiight heeere."). Getting those adhesives off gently takes a while. Then Hannah and I usually head out to IHOP and come home for a nap.

I am looking forward to this (hopefully) last sleep study. It is in a free-standing sleep lab, and I will get my own bed! Ahh, the decadence of horizontal sleeping! Thank you, VCU!

I liked this doctor, but he didn't really tell me anything new about Hannah. I was interested to hear his statistic that 80% of individuals with Down syndrome have sleep apnea. He also added that most sleep doctors believe that the other 20% also have apnea, but the doctors just were not able to catch it!

Apnea was not a surprise to us. We can sit and listen to Hannah stop breathing. She is quieter now that her tonsils are out; not as much snoring. But she does stop breathing frequently. We expect Hannah to need some sort of positive air pressure device for the rest of her life. I'm wondering how much extra energy Hannah will have once she adjusts to the machine. This could be trouble!

Update on Fish-ka-bob: Yes, it is the fish's name. For short, Hannah's been calling him "K-Bob".
Invented by Beth at 9:24 PM

Ahhh, sweet Hannah. Bless her heart!!Good luck with this next sleep study and CPAP test. Anya has to have another one this summer, and I don't want to do it here.

This is Joyce, Sarah's mom. I am so glad you found our blog. I have so enjoyed reading yours. Hannah is so precious. I just love her red hair. I thought for sure I would get just one to follow in my blazing trail but no such luck. Sarah is getting a few tiny freckles on her checks at least.

Interesting to read about the sleep studies. That is one area that we have missed. Funny that you go to IHOP after the appointment. That is exactly what Sarah and I do too.

Looking forward to following your adventures.

Landon, my almost 1 year old, may be doing a sleep study soon as well. Right now, his issue isn't stopping breathing, but that his oxygen saturation level drops when he's sleeping, and well stays kind of low when he's awake too. Did Hannah ever have any problem with that? I hope the sleep study goes well and I hope that you get some useful information!! Good luck Hannah!

knowing how Hannah loves medical equipment she will probably have a hard time falling asleep the first night with the CPAP because of the excitement.
Alaina too still has apnea even after having T&A removed. The snoring is 100% better but she is still very restless when sleeping. Unfortunately (or maybe not for me) she will not cooperate for a sleep study at this point.
BUT, I am happy to announce that for the past 36 hours she has decided that using the potty isn't as bad as she thought it would be!!!!She is even pushing me away when I try to assist her and says "Nanana's turn" and "Go Way"
But you better believe I have to be close by to do the "Happy Dance" with her when she is finished.

Hannah looks like a real trooper. She is so adorable. Hope all goes well.

I hope it is your last one too. She's tough to go thru that without complaint. :)