At least, I hope that's what it is.

This girl is SO moody.   A few weeks ago, she was in her music lesson.  It's 30 minutes long.   She loves Miss Heidi.   She always goes in happy, and comes out happy.   But on that day, she went in happy, and 10 minutes later she came out in tears.

Through her tears she said she wanted to go to Great Wolf Lodge.   Miss Heidi was surprised.

I was confused.   We went to Great Wolf Lodge months earlier. Hannah liked it, but never really mentioned it again.   And now, suddenly, she was terribly sad that we couldn't go there right then and there.  Bawling.  Sniffling.

I comforted her first.  Got a tissue second.  Cleaned her up.  Deep breath. Big smile.  Go back to the lesson with her wet eyelashes sparkling.

Five minutes later, she was escorted out, again in tears.

This time I gave her the riot act.  She was creating this drama for no reason.   Totally random.

I'm a pretty no-nonsense parent.   I told her that she was acting inappropriately. That she needed to cut it out.  She had to apologize to Miss Heidi for wasting her time, and apologize to me for wasting my time and money.
Which, she begrudgingly did.  Her lesson time was over.

And a silent drive home--her choice; I had said everything I needed to.

While I was enjoying the silence of the evening, I looked up into the night sky and saw an almost-full moon.  It was just a couple days before the SuperMoon.

At least I knew the reason for the breakdown.

Last week Hannah spent some time at a friend's house while I was out.  By all reports she had a wonderful time. She was funny, polite and enjoyable company. A trip to the dollar store to get materials for April Fool's jokes.  All was well.  Until I arrived to pick her up.   Then she became snippy and grumpy.    Ahh, the power of the parent.  My mere presence is enough to set off a reaction.

It wasn't because her play date was over.  It was because I am her mother and I have the audacity to breathe. This I know because I've lived through it before.  She is my third child after all.  I probably even felt that way myself as an adolescent.

It really is quite entertaining.  Annoying too.

My friend who witnessed Hannah's behavior is thrilled.   She LOVES the fact that Hannah is so typically a teenager.  She is giddy over the idea!

Except when I'm right in the middle of it.

Hannah has the eye-rolling technique down to a science.  The only part she hasn't figured out is that she should use that technique sparingly and with discretion.

Stepping back from the immediate drama, I can appreciate Hannah's position.  I am thrilled that she's growing up and stirring things up.  It's a sign of independence.

Just writing that sentence brought me back to something I said years ago.  I only recalled it because someone quoted me in an article when Hannah was seven.

“We can’t wait for her to be a teenager, and cause some trouble,” says Beth L., laughing. “That will be a sign that ‘Okay, we’re on track’.”

I guess we've arrived.  I need to keep laughing.

And on the topic of independence, Hannah is calling the shots these days.  Literally.

After trying to get chicken pox four times--unsuccessfully-- Hannah had a titer drawn to see if maybe somehow I had missed noticing a mild case of pox.   It was negative.  So it was time for Hannah to get the varicella shot.

(I am not a fan of vaccines, especially 'optional' ones.  But since Kate was hospitalized for encephalitis from chicken pox with 107 degree fever at age 5, I have been watching Hannah closely.  I'd rather she have natural immunity, but I also know how difficult chicken pox is for adolescents and adults.)

So we stopped by the doctor's office on Monday.   In the waiting room, the nurse called Hannah's name.  Hannah stood up and said, "It's okay, Mom.  I'll do it myself."

And off she went.

She came back in about 90 seconds, smiling, with the nurse saying, "She's a pro!"

That's my girl. Growing up in many ways.  Brave, temperamental, feisty, and goofy. 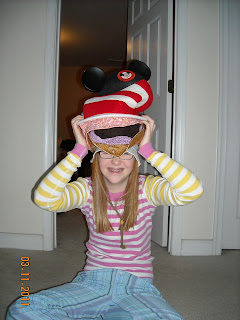 You know, Beth, I see YOU in Hannah so very much!♥

What we all hope and strive for as our enhanced chromosome children grow.........
Good Job Mama Beth now pat yourself on the back and go eat that last piece of cheesecake (your going to need such nurishment for the next teen moment or two!):-)

This was an awesome post, Beth! I, too, am thrilled for Hannah! :) And I feel for you, too.

I love Hannah's independence and typical teenage stuff, but at the same time, I'm really not looking forward to all that drama!

In my Dance Education program, we recently finished the "Adolescence" stage. I'm going to be writing a post about it soon, but ALL that you described was on my test!! Hahah! :) It's so funny how it works out, but in the end... those crazy adolescent students of mine come out fabulous, and I love 'em all!