We're on the upswing! Thanks for all your well wishes. It really is nice to be able to breathe again. Literally. And Hannah is much improved over yesterday's complete whine and mope session. She had fever off and on for 36 hours, but now is perking up and ate a complete dinner. She doesn't sound like herself yet, but I think she's going to manage our trip in another couple of days.

We are planning on going up to Philadelphia on Monday, and probably just turning around and coming home again on Tuesday. If I'm too tired, we may come back on Wednesday instead. It's only a 5 hour drive, but we won't be leaving until around 3:00. That puts us near Washington, D.C. at rush hour, which won't be pretty--adding on another 90 minutes at least. Hmmm. I'd better think this through!

Yesterday, when Hannah was not dozing, we went through a big box of pictures. She loves to look at photos from when she was a baby. I saved these three out to share with you. 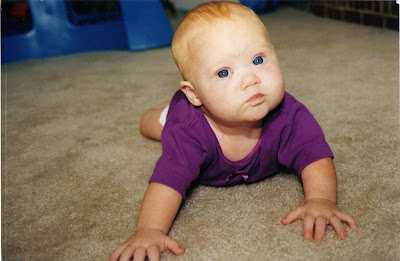 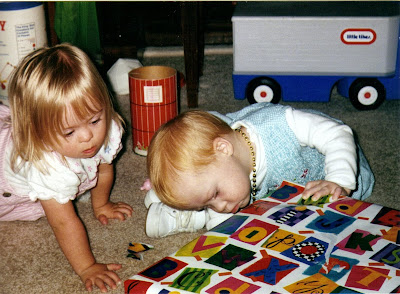 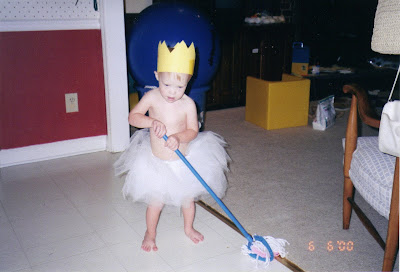 She was such a cute little girl! No fair that she's growing up so fast!
~~~~~~~~~~~~~~~~~~~~~~~~~~~~~~
Kate called today to chat with The Birthday girl. Hannah didn't even remember it was her actual birthday since we celebrated on Thursday! It was fun to talk to my big girl. A little bit later I managed to catch Kate on skype--with both the video and audio working!! That was really great! We haven't 'seen' her in months! I hurried Hannah out of the shower so she could see Kate. 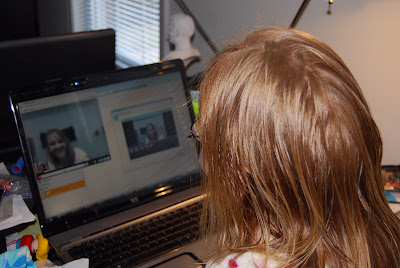 Kate is doing well. It's a difficult job, and hard to live in a culture so different from what she knows. She had a little break though. This weekend (Fri/Sat) she went with the other Peace Corps volunteers and to meet Vice President Joe Biden in Amman. It was fun to be in the city--I don't know which she enjoyed more--meeting the VP or having sushi for dinner! When she returned to her village today everyone asked her what she did in the city, and she had to explain that Joe Biden is the "Under-Obama". That was the only way they could understand who he is!
Chris has been home this week for spring break (as you might have surmised from the video in the previous post--I know you're smart like that!). He heads back to school tomorrow. We're all hoping that he doesn't catch this cold. He has a very rigorous academic schedule and can't afford to miss a beat. He's been working on a computer science project and doing some research for a paper in his Emerging Diseases class. Not the best way to spend Spring Break, but at least he had his dog at his feet while he was working!
~~~~~~~~~~~~~~~~~~~~~~~~~~~~
One last thing--don't forget the time warp tonight. (I'd quote Rocky Horror here, but I already did on Facebook and I don't want to bore you more.)
Invented by Beth at 9:00 PM

and i'm so happy you got to see and speak with kate!!

glad everyone is better.

Hannah was the cutest little babe. It's hard to let go of the baby years -- at least for me. Gabe turns five on this coming Friday. His body is morphing into a big boy body and he does this funny stance lately with hands on hips and then says, "Oh, actually...".

It must be hard to have Chris and Kate away from home. I'm happy that you're going to Jordan soon. I bet Kate will be very happy!

Hope Chris didn't catch the bug and that his project went well.