I'm sorry I've been AWOL for a while! We've had a whirlwind of revolving houseguests and activities that have kept me from getting much of anything done other than wash sheets, cook and drive around.
Here is the run down of the successes of the past 10 days or so:
IEP Mediation: I went to Macey's mediation and pretty much kicked butt. It took a lot of arguing, but finally, after a few calls to the VA State DOE to clarify the law regarding age of compulsory schooling, Macey will be able to attend an extra year of inclusive preschool at her local elementary school. The school system was trying to force her into Kindergarten and she is just plain not ready for that. (Background story: Macey was adopted from Ukraine almost two years ago and is doing her best to catch-up, but it's hard when you have Down syndrome and significant hearing loss.)
Chris and High School Graduation: My parents came to visit over the weekend and we took the opportunity to finally celebrate Christian's graduation. A delicious (and I mean DELICIOUS) meal at Ruth's Chris Steakhouse was lots of fun. The graduation included a lovely presentation of a crayon-made diploma, a song, and no wild dancing. Toasts, humorous stories and huge desserts filled out the evening. 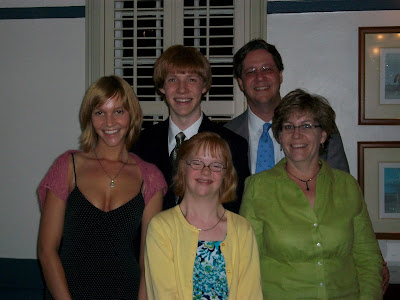 AnnaJoy: A newly minted American, AnnaJoy was recently adopted by dear friends of ours. They have been living in China for several years and have come home to finalize AnnaJoy's adoption and have some respite from their work in China. They traveled from Oklahoma to visit, and we were all thrilled to meet this spunky three-year old!

Chris and College: He has his roommate information, and is in one of his first choice dorms! We went to the campus last week and ironed out some things at the Registrar's office, and now he is officially an academic Junior (though still a social Freshman). Now the shopping begins! Only three weeks before launch!!
And a run down of the not-so-successes of the past 10 days:
Bike Camp Take 2: Soon after we returned from the Charlotte Lose The Training Wheels camp, we realized that there was going to be a session of the same camp here in Richmond. I signed her up after realizing that she still needed some "tweaking" with her balance and awareness of her surroundings. The first two days were great, but today she crashed a few times and is now not wanting anything to do with her bike or camp. I am wiped out from running and cajoling. She is SO close to becoming an independent rider, but she's scared to maintain the speed she needs to balance well, so she ends up fishtailing and loses control. The "professional opinion" is that if she cannot maintain a fast enough speed, she will not be able to ride independently. We'll try again tomorrow, with elbow and knee pads to help cushion the pavement. After that, we'll have to make a decision about whether to keep trying, or give her a different option for riding. We're not quitting. Through tears, Hannah says, "Bike riders never give up."
(If you missed the first version of bike camp, click here)
2, 548 shards of glass: A microburst storm lifted up our glass patio table and smashed it over our deck. Now we have to pick up all the pieces to save gentle paws. I've heard that a shopvac might help the clean up! I was wishing that glass was magnetic.
$5853.00: Cost of Hannah's orthodontics. This doesn't include the oral surgery she is having on Tuesday. We do love the doctor, but were hoping that an office without all the Playstations and computers would have been less expensive than the swanky Hug-o-rama office.
Still waiting: Kate has not heard much from the Peace Corps. Everything is fine, but it sure would be nice to know what kind of timeline to anticipate, and what preparations need to be made.
We've had no real disasters or disappointments, just regular ol' life, coming in above the regular speed limit.
Invented by Beth at 9:30 PM

you have been busy. praying Hannah will be a bike rider soon. Noah is so far from that point. we can not get him to peddle at all. He only wants pushed. : )

Sounds like you've been busy!! I hope Hannah has better luck riding her bike tomorrow! What a trooper!

You have definitely scared me with the cost for Hannah's orthodontics. We better start saving our money now!!