The end of the Research Study

We're heading back to Baltimore today.  The final visit to Kennedy Krieger is on Friday.   Hannah's got a long day of testing ahead of her (cognitive, medical).   Fortunately she loves that stuff.  I think it's because it's a novelty; she thinks it's fun.  I never test her.  I know exactly what she knows, since I'm with her so much, so I don't need to test her.

Our "field trips" this time are to visit Glen Echo, the home of Clara Barton.   Hannah read the Magic Treehouse book about the Civil War and she's been interested in Clara Barton ever since.  She's read a couple of simple biographies about her, so the next logical thing is to go see where she lived!    It's just outside of Washington, DC, so hopefully we'll get there for the noon tour today.   Then we'll head over to Annapolis to stay with a college friend of mine.

After the doctor's appointments hopefully we'll have time to head over to the Flag House.   Hannah's music class is working on patriotic songs, so what better place to go than the place where the flag was made that inspired Francis Scott Key ?    I remember taking the older kids to the Widow Pickersgill house--at Chris's request.  He was about six years old (pre-Hannah), and was quite the little patriot.  Since that time, the Pickersgill House has grown up and seems to be a nice small museum.   We shall see!   We won't make it to the Fort, since it's Friday afternoon---traffic traffic traffic! 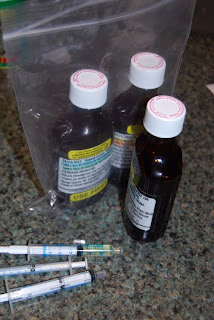 James and I have been mulling over the options regarding continuing with the Rivastigmine medication.   We both are leery of long-term medications, especially ones that don't have a track record.   This medication has only been used in the Alzheimer's population--which is generally a population that is reaching the end of their lives.  There is no information about how it could affect an adolescent.   We also don't know if there will be any regression.   Will she keep the gains she's made?  If this medication is helping to clear out the amyloid plaques that have building up since she was born, how long will it take before they build up again? 13 years?  How much experimentation are we willing to risk?  (Answer: not a whole bunch)

I have many questions for Dr. Capone, and our pediatrician here.  I wonder if it's a good idea to have her take it for 6 months on, 6 months off...I wonder if we should just drop it entirely...   I don't think the doctors have answers to what I want to know.

I have a very dear friend who says, "What Would Beth Do?" when she has a problem with a kid or a spouse.   She cracks me up.   She only says that because she's so patient, gracious and merciful, whereas I am just straightforward, no-nonsense, tell-like-it-is.   If I don't like it, you'll know it.

So, tell me, What would you do?

Wow - that's a lot to consider! The 6-months on, then 6-months off seems like a happy medium. I'll be interested to hear what the doctors have to say. If it were my daughter (and hopefully the trials went well & maybe this will be available to Ainsley soon!), I would probably keep her on it as long as she hasn't had any nasty side effects thus far. And then revisit it each year to see if we continue this course or modify it.

The field trips sound fun - hope you have a great time!

I'm anxious to hear what the doctors have to say!

My first reaction is to say--I'm with you. I think we'd want a whole lot of questions answered before deciding. :)