Have you ever looked at Down Syndrome Blogs on Facebook? That's where I met Eric Waksmunski. He is a new dad to twin boys. The boys were premature, and are fraternal--what are the odds of both of them having Down syndrome? 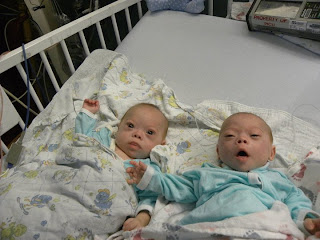 Shane and Wyatt have been through a lot--struggling with digestion and feeding problems, surgeries, growing.  Their parents have been doing their own growing.  They have quickly learned to be advocates for their sons.  And now they have opened their lives to a local Pennsylvania newspaper.  You can follow along with the series of articles by clicking on the Down Syndrome box at the Times News.  Brian Skotko is consulting to the series as well!

You can also follow and support them on Facebook at "Shane and Wyatt's Journey with Down Syndrome".
Invented by Beth at 9:30 PM

Wow, that is amazing! Aren't they cute!

Aren't they just adorble? I have been following them on FB as well. So many things that are silimar to what Christopher went through. It brings it all back.

That's amazing! I know of another family here in NZ who also have boys who are fraternal twins and both have DS. I can put you in touch with their mother if the parents of your twins would like to contact her. I'm sure she'd be interested too :)

I know those little dumplings too1 I'm a new friend of Eric's on FB.