NanTalk and Odds and Ends

Boy! This OPT stuff is difficult to write. I want it to be understandable, yet accurate. There's a ton of information to impart, and most of it is easier to demonstrate rather than write. Time to pull out the video camera.
While my brain is filled with ideas and directions for my next post, I'm going to do a regular little ol' post about stuff going on here.
The other day I was planning on grilling cheeseburgers for dinner. I had the patties prepared, the water heating for the noodles with turmeric (oh so yummy!), and the veggies ready to steam. And then I remembered that we were out of gas for the grill. James offered to go get a new canister, but I was hungry NOW. So I came up with a very lame old childhood recipe to use the ingredients I had.
Remember having that macaroni/tomato sauce/ground beef casserole? It's pitiful. When I was young, my sister named it "Glop". It's an onomatopoetic name: the sound of it being scooped up out of the pot and glopped onto the plate.
In James' family it was called Goulash.
Hannah delighted in eating it (unlike her parents). I told her about the different names for this tasty entree, and she came up with her own: Glopagos dinner. 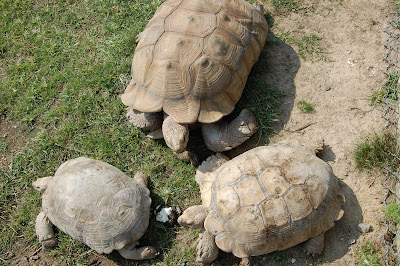 Another random Nantalk, while attempting to leap all the way down the hall, "Wow! I just got my Grand Jeté back! I wondered where it went!"
Two weeks ago, before we knew what the sun looked like, Hannah got to throw out the first pitch at a softball tournament fundraiser! It was so much fun, even in the freezing cold weather! 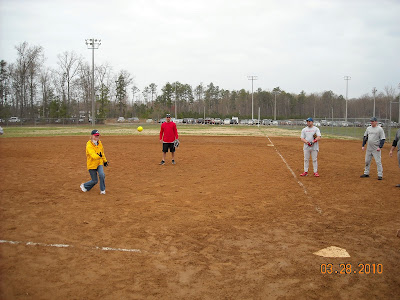 She's not playing baseball this season, so it was fun for her to be out on the field.
Chris is nearing the end of his semester. It's been a challenging one for him--a heavy course load and one class that is pure torture for him. He just finished a massive research paper and is catching his breath before exams in a few weeks. He's also awaiting his housing assignment--William and Mary has a confusing and cumbersome method of lottery dorm assignments (at least to me!). They don't have enough dorms, so some students have to live off campus. It will be nice to know where he's going to be in the fall. This summer he's hoping to get an internship at one of the local hospitals.
Kate is battling the onslaught of insects in Jordan. She visited with Peace Corps friends over the Easter weekend, and when she returned to her house she said "A legion of bugs has invaded my house." Plus some giant spiders.
I hope they've all moved out by the time I go visit in July! I am planning a trip to Jordan.Kate and I will also go see the sights in Egypt! I'm so excited! At first I was thinking of bringing Hannah along, but I think that it would be a bit much for her. She hasn't done much international travel (just Mexico and some Caribbean countries), and I think the heat and the cultural differences would be a lot for her to handle.
Our time with Baby K. was lots of fun. She has made so much progress since she last visited. She's talking, singing, walking, and doing puzzles. She loved the dogs, and they thought she was tasty...mmm, baby fingers to lick! 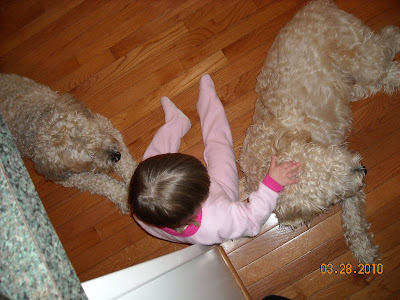 I think the heat and cultural differences might be a lot for me to handle, too! But this trip sounds SO EXCITING!!!

By the way, I've heard that dinner called goulash or also Johnny Marzetti. I just made it a few weeks ago :)

Our family called it Goulash too. I hate it. Lol. And Baby K is doing wonderfully. I saw her a week or so ago and was so impressed by her progress. I'm glad she got some time with you guys, I'm sure she loved it

Thanks for the info on odd numbered years with girls. Makes me look forward the year 6!

I am following all your 'teaching' ideas with great interest. We had IEP meeting for transitioning our son from pre=k to k. Not sure I like anything about where he is going. So I may just be home schooling him along with the others. Not 100% sure I like that idea either. But I'm taking notes.