Even though all this stuff is WAY past due, here are some odds and ends that I think will fall through the cracks if I don't get it posted soon. So be prepared for a non sequitur post!
1. Hannah (and I) have been thoroughly enjoying her new Girl Scout Troop. There are about 6 or 7 girls in the Juniors, a couple of Cadettes and 4 Brownies. I primarily work with the Brownies (no, I am not a leader, I just pretend I am one, yet, I have no responsibility, which keeps me very happy!). By keeping myself busy with the younger girls, I am out of Hannah's way, but still available to lend a hand if necessary. Hannah is doing well, starting to make friends. All the Juniors have jobs in running the troop, and Hannah is the Troop Photographer. It's a job she loves and takes very seriously. So far the girls have earned 2 badges and 1 activity patch. Which is three times as much as she earned in 6 months at the old troop.

Last week there was a Halloween party, that was actually hosted by her previous troop (uh-oh!). It was half-(insert past-tense expletive here=derriere), as I was expecting. Most of the girls who attended from our troop were disappointed, but Hannah thought it was great! Of course, she had never been to a Halloween party before. They had a cupcake walk, played musical chairs, had a "fortune teller" and a couple of other games. Here's Hannah on the cupcake walk gallop.
She was concentrating pretty hard!

Make photo slide shows at www.OneTrueMedia.com
2. Kate called last week, and emailed briefly today. She is staying with a family in a town. The family has 5 children, ages 18 months-13 years. The oldest three are girls, then the little ones are boys. The family is pretty well off as things go in Jordan. Kate is enjoying the homemade food much more than the "dorm" food she had earlier. She says that her host mother literally shoves food into Kate's mouth. I guess they think she is too thin....but how can they tell if she's wearing all those loose clothes? Water is a problem. The family receives delivery of water once a week and they have to ration it to last. That means there are showers only on the day of delivery. That's taking some adjustment on Kate's part! To use the internet she has to take a 20 minute bus ride to get to an internet cafe. They don't have wireless, so she has to use the cafe computers. Hence, no pictures until she can use her own computer.

Kate has 6 hours of language and culture lessons every day (maybe Saturday off? I haven't figured out which is the day of rest). Two of the days she travels to a larger town to have classes with the entire Peace Corps class (42 volunteers total, but only 6 in her smaller town). She is surprised how much she is enjoying not having to deal with men! She says it makes things much easier! (May I now put in a plug for single gender colleges? I went to a women's college and not only was it great fun (plenty of male visitors on the weekends), but it was a very nurturing environment. I even met James there!)

3. Chris is doing well at school. I know he's working hard because he usually is in the library when I call him! His friends gave him a surprise party at midnight. Which was good, since his cafeteria birthday pie arrived a day late and his gift from us was nearly a week late! We are ready to have him home for Thanksgiving--it's getting a little quiet around here!
4.Hannah has been doing some cooking and she wants to add a "Cookin' with Nan" feature on the blog. I have plenty of footage, I just haven't had time or energy to sort through it! 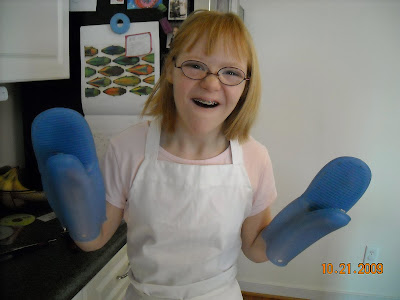 5. Hannah had her last soccer session today. I couldn't find her warm-up jacket, so I looked around for a sweatshirt. I found one of Kate's, and hoped it would do. Sure enough, it perfectly fits Hannah. James and I were remarking about it, and then I realized that the girls are definitely shaped differently, but they are only 7 pounds apart.
6. Swimming lessons are going full speed ahead. Hannah is a "sinker", but she's finally getting the hang of the backstroke. That left arm isn't behaving quite as well as the right, but she's moving, and not sinking!
Make an on-line slideshow at www.OneTrueMedia.com
7. The day Kate left for Jordan we had tickets to... 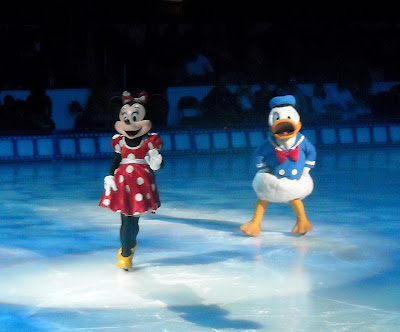 Disney on Ice! Hannah invited "Sheena-my-partner-from-dance". The three of us had a great time. I was surprised that I actually liked the show! Sheena kept saying she felt like she was 7 years old again! It was lots of fun, and great to see the two of them together again. (You might recall Sheena from Hannah's dance performance here.) 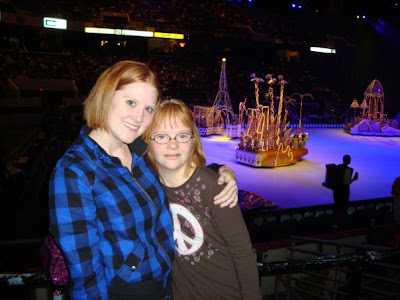 And there you have it. More than you wanted or needed. And, if you can believe it, I deleted two other items, to save you from incessant Hannah-ing.
Invented by Beth at 10:00 PM

I love it!!! I wish we lived closer because we have so much in common. Guess what came to my house yesterday? The poster for Disney on Ice in Cleveland:) The minute I saw it I said "I am going". Our show this year is Celebrations. My mom wishes Nemo would come back. That is her favorite. I just like them all.

I want the deleted portion cause I love Hannah-ing!!

I was a sinker too! What is with that??

Love Disney on Ice- went this winter (read summer your time) to Princess Wishes with my 3 year old, and months later she is still talking about it. Amazing show.

Is Hannah planning to offer samples of her baking too?!

*hugs for you guys*

I would love to tune into "Cooking with Nan!" I hope the pilot episode airs soon :)

Yes, give us the deleted portion!