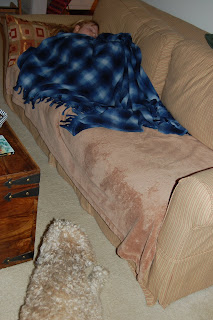 Thanks for all your well wishes! (And jokes, Jay! The two legged cow was a new one for us!)

Hannah's not any better (yet), but she was feeling so badly this afternoon that we bundled her up and took her to urgent care. Fever was 103--and that was with Motrin! Both the strep and flu tests came back negative, but when the doctor came in and examined her she immediately said, "This child has strep. No doubt about it."

I had looked at her throat several times over the past few days, since her throat has been one of her complaints. Without tonsils, there wasn't much I could see. But this doctor said that Hannah had a telltale strawberry mark on her soft palate.

So she's on meds now (and yes, we're using pro-biotics).

Chris woke up with a sore throat today as well, and I could see white spots on his throat. So he'll be needing to be seen by a doctor as well. He's got three tests this week, so he really needs to get better fast!

Hazel, one of our dogs, is a diligent babysitter. She's the lady-in-waiting, supervising Hannah's naps. She's quite concerned. 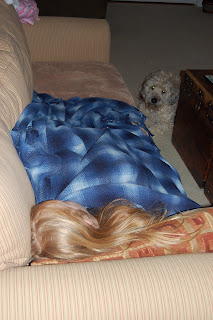 Hopefully we'll see an improvement by tomorrow afternoon!
Invented by Beth at 7:35 PM

OH too bad. I hope you feel better soon. Your dog is cute watching over you.

I pray everyone gets better soon!

praying she gets well soon!

Get well soon,Hannah!
The picture of the dog watching over her is so sweet.