Uh oh. I have visitors.

I'm going to have to behave now, because Natalie gave me an "award" (*blush*). She said some really nice things about me (or, at least, this blog). So now all these friends-of-a-virtual-friend are heading this way from all over the world. I'm kinda feeling popular!

The award is sort of like a chain letter...I am supposed to write about Five Addictions, and then pass on the award to five more bloggers. This is hard! I was talking to my son about addiction, and how I don't really have any. He told me that there are 38 known genes that play a part in addiction. Maybe I'm missing something genetically. I am really bland. At least in the addiction department.

But, I will do my best to live up to the award bestowed upon me. (I don't think it even has a name....is it The Addiction Award? That's not such a nice name now, is it?) Natalie didn't make this up...she was chosen because, I think, she is both charming and hilarious. I first found her on Caringbridge, when her younger son was fighting leukemia. She was even funny then, between the tears and fears. Fortunately, Finn finished first in his fight, and Natalie naturally turned to nurturing her remarkable writing on her blog here . (I'm sure I've impressed her with my admirable alliteration.)

So, now on to my addictions.

1. The Computer. This is my only real addiction, though lately I have been able to tolerate withdrawal for longer periods of time. This is partly due to the fact that my laptop has frequent temper tantrums, shutting down when slightly irritated (bad video card). It's also due to the fact that I'm supposed to be homeschooling my kid and people in this family expect to eat. I don't know what's up with that.

2. Dessert. Oh heavenly. Must be home-baked to receive the highest accolades, but I have been known to be happy to find the last crumbly Fig Newton if that's all that I can scavenge. After all, it is golden-flakey-tender-cakey, so that counts for something.

3. I am addicted to not cleaning. I really will go out of my way to avoid tidying up. It's getting harder because my two lackeys are technically adults now, and not home much, if at all. While Hannah is really good at her chores, it's really not fair to make her clean all the bathrooms, vacuum, dust, sweep, etc. I am fortunate that I am married to an enabler who enjoys washing dishes. He's the kind of guy who shows me how much he loves me by doing the laundry.

4. Punctuation. I really like punctuation. I use it generously, in every sentence, at least once. I'm quite fond of parentheses as well (though you might not have noticed). Punctuation is really a good thing. Period.

5. Since I am fresh out of further addictions, I will highlight one (or more) of Hannah's addictions. This is, after all, mostly a blog about her, so I feel I should share the award limelight with her.

5.a. Hannah is a recovering Wiggles addict. This addiction lasted for nearly seven years, four concerts, three CDs, four VHS tapes, and seven DVDs. She was in love with Murray FOREVER. It was painful for all of us.
Age 7 Age eight, in her Murray Outfit, "shopping" for Fruit Salad (yummy yummy) at the Children's Museum. 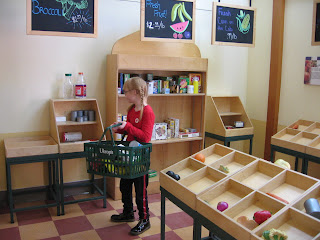 We really do appreciate how much The Wiggles taught Hannah. She learned language, movement, music, rhythm and bad jokes. She learned to use her imagination, role playing and more bad jokes. All useful skills. But now we rejoice.

5.b. Hannah has replaced this addiction with a fervent love for salami. She adores it. She could eat salami and muenster cheese for three meals a day. She'll eat it on crackers, or in a wrap. She'll eat it just plain, slapped onto a plate. The nice thing about salami? It's quiet. It doesn't involve giggly green dinosaurs or adult men pretending to have fun while driving a small big red car.

Uh oh again. Now I have to choose just five (5) other bloggers to whom I bestow this same Addiction Award.

1. Rechelle at The Country Doctor's Wife. She's really funny, and so is her sister:
2. April at April Showers. I can only imagine what they were like when they were kids.
3. Nicole at All4MyGals. Nicole has not been blogging as much lately since her youngest daughter was recently diagnosed with diabetes. I first found her blog (or she found mine) because we both have daughters with Down syndrome. Nicole has a wonderful ability to thoughtfully write about difficult emotional and spiritual topics. Sometimes after I read her writings I feel like I've been surrounded in love and acceptance.
4. The Daily Lois. I can't get enough of this round baby. Another Down syndrome blog.
5. Charissa at Country Living the Urban Way. Last year this remarkable homeschooling family adopted a tiny little girl with Down syndrome from Ukraine. When I say tiny, I mean tiny. Ava was about the size of a 10 month old, but she was four years old. It's a joy to see the family grow in love and learning as they bring a lost child back to life.

Must go to bed. My computer addiction has been satiated for now. It's nearly 2:30 a.m.! James gets up at 4:00 am for a business trip. I think I'll sleep through his alarm. No doubt I'll need to proofread this in the morning. Forgive any blunders. At least I know I've got the punctuation covered.

I am not surprised at all that you got an award. I always enjoy reading your blog, and reading it always leaves me with a smile. You are an excellent writer...and very funny!!! :)

Congrats! Oh you made me laugh about the Wiggles addiction! My Noah loves the Wiggles! The Murry outfit was great!!!

Yes, congratulations on your award. You definitely deserve it. Loved hearing about Hannah and the Wiggles. Whitney just loves the Wiggles too, and loves to sing & dancing to their tunes. Hannah's Murray outfit is very cool!