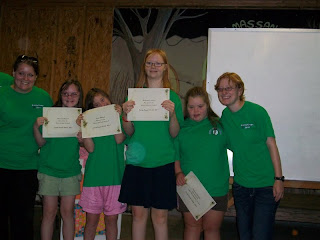 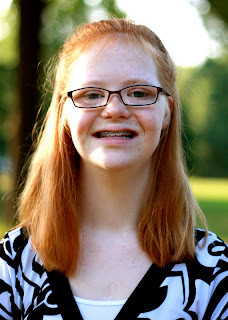 Hannah a beautiful girl and with any luck she'll be luckier than the rest of us and stay lean as she gets older! :)

I loved reading this. I just posted this morning about Beth's weight issues. She was a rail until she hit puberty; now she just keeps getting bigger and I'm not sure why!

I just thought of something! Beth takes methimozol for her thyroid. Maybe weight gain is a side affect? I'll have to look into that.

Rachel is very thin right now, but she is just seven. I am thin and my other two girls are too, so I am hoping that genetics will help keep Rachel slim. Like you, we are not a family that gets out and exercises regularly, and Rachel LOVES her pasta, chips and goldfish crackers. I call her the "Carb Queen". That camp picture is a riot. Hannah looks like she must be over six feet tall. Did they try to find the shortest counselors in the world or what! LOL

From the picture she looks like she should be the camp counselor! Are you sure she wasn't the one in charge?

But totally agree she is PERFECT..always has been and always will be!! Just love that girl... her mama isn't too bad either :-)

PS: I got to talk and share with Robbie this evening... I teased him about our conversation about like/disliking certain subjects aka math......He is planning on outsourcing the girls math. Guess who he plans on outsourcing too?
;-p
I told him I have been trying to outsource to the Shenanigan clan for years!!

I really enjoyed this post! Hannah is such a beautiful girl. You all are a great family :) -jackie

Dear Hannah,
I don't like broccoli stalks either. In fact, I don't even really like broccoli, but I do make the boys eat it. Shhhhh, don't tell anyone!

Beth, I laughed out loud at your paragraph about bookworms and exercise!

I am in love with your girl and I think she is perfect in every way - I'm soooo glad I finally found your blog and can read all your bid-ness.

Thanks for sharing. I love reading about Hannah and your family. I'm in awe of your ability to keep up that schedule of activities! And, "Right now she's perfect. And later, she'll still be perfect.", perfectly said :)