Time to catch up and fill in!

1.  When we had our second trip to Kennedy Krieger we received a copy of Hannah's EKG (did you ever wonder why it's an EKG when it's an ElectroCardioGram?  It originally came from the German, Elektrokardiogramm). There was a little glitch that Dr. Capone mentioned.  Hannah showed borderline LongQT.   This is when the ventricular electric charge doesn't re-charge fast enough to maintain sinus rhythm (potentially fatal).  Her EKG showed she was just over into the borderline.  The weird thing is that LongQT is a congenital problem--very rarely diagnosed.  It also can result as a side effect of certain medications.    Hannah was not on any medications. Obviously she's had a myriad of cardiac tests, catheterizations and surgery--LongQT never showed up. So, after a short freak-out session, we decided that it was just a screwy test result.


We already had Hannah's bi-annual cardiology appointment scheduled later that week, so I brought the EKG report along.

Sure enough,  Dr. F's interpretation was that the EKG was "over-estimated".  That the measurement could be "estimated" was news to me. I thought that EKG was rather precise, but apparently there is room for human error in reading the results.

Dr. F.  did the most thorough cardiac exam that I've seen since Hannah's surgery 11 years ago. Hannah's open heart surgery repaired her 2 ASDs, 1 VSD, a PDA and a clefted mitral valve.  It's been so long since the surgery that I rarely think about it anymore.  Hannah was really interested in the echocardiogram, and the doctor explained everything--blood flow, pressures, mitral valve.  She even showed Hannah her liver and kidneys.

The best part was when Dr F. said Hannah was doing so well that we don't have to go back for THREE YEARS!

2.  Last week we upped the dosage of the "placebo/Rivastigmine". The first two weeks were at half-dose, so now she's on the maintenance dosage. So far she has not had any side effects (most common side effect: GI upset).  We are still assuming she's on the placebo.

3. Hannah has been unusually interested in words lately. She's been asking for definitions, which she's never done before.  "Mom, I don't know what does 'eager' mean?"   "What is migration?"

She's also been trying new words that are not in her typical vocabulary:  "I'm sorry I was grumpy, Mom.  I was just feeling impatient."     When Bunsen was boisterously running around the house she said, "Bunsen, you make me concerned."

4. A year or two ago I tried to teach Hannah how to alphabetize. We fizzled out after a bit. She did well as long as there was only one word for each letter of the alphabet, but getting her to look at the second letter in a word (pain, plant) didn't go very well. This week we brought out the dictionary, letter tiles and random flashcard words.  She picked it up right away. I had her alphabetize a dozen words at a time (using an alphabet line).  Then I had her find each word in the dictionary. She gets a little lost using the guide words  finding words beyond figuring out the third letter: 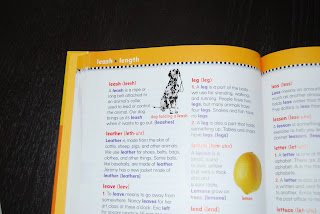 I am excited that she's making progress and figuring it out!  Waiting until a child is ready for a particular task is key to success.

5.  Hannah successfully made a ponytail! 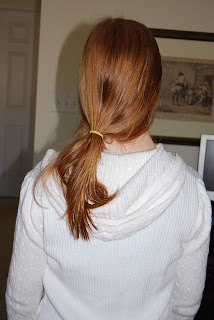 (I just noticed that the picture you see over Hannah's right shoulder is an 1851 Fasel print of Thomas Duston protecting seven of his children during  an Indian Raid.  To read more about an interesting story about Hannah's namesake, look here.)

6. Hannah just finished her latest series of art classes.  They worked on perspective and self-portraits.   Since my printer is not cooperating, all I've got are some pictures of her three-dimensional cube of her self-portraits. 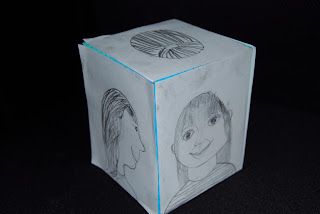 All the students thought that the profile was the most difficult to draw. 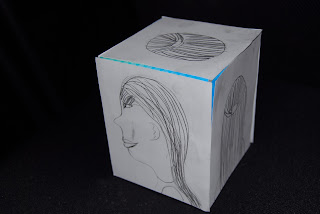 I especially like the back and top-down views.  She really figured out how her hair must look from above with a barrette! 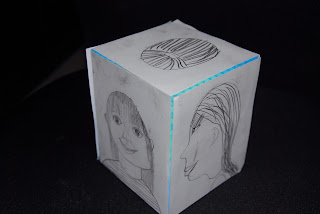 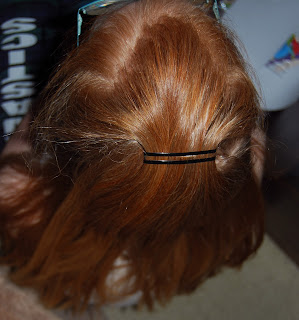 7. We all had a miserable cold 10 days ago.   Hannah still has some congestion.   She felt terrible. 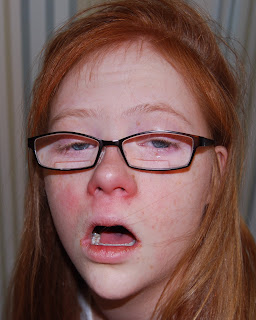 8.  We finally found Hannah's camera, so she's taking tons of pictures and will be creating a picture blogpost soon.  Maybe.

I LOVE this update!! Wow, that picture cube is amazing!!! Great job, Hannah! Very interesting about the EKG result - so...nothing to worry about?

It's wonderful to hear that Hannah's heart is okay!
Hannah is such an encouragement to me!I think it is just awesome that she is asking you what words mean and using new words!
Sorry Hannah has been sick.We have been having a terrible time with colds at my house too.

Bless her heart, she sure looks like she felt miserable. So glad she is over that! I'm also really glad that her heart is OK. The alphabetizing is awesome, and oh my, what an artist she is!! I can't even draw that good! It's always encouraging hearing how you all are doing. Thanks for sharing with us all!

Congratulations on the good doctor's appointment!! And I hope Hannah feels better soon- it sounds like she has too much going on to be sick!

So fun to hear about all of her learning milestones! About the congestion--do you think she'd tolerate the wet socks treatment? It really helps the boys when they're stuffy.

Lol! I'm sorry to chuckle, but that face is too hilarious! A bit of drama queen, perhaps? (We've got one living at our house, too!)

Wow, what a frightening moment! I didn't know that an EKG was interpreted either -- and it is good to learn.

I like that Hannah is exploring vocabulary. And I think her self portrait cube is genius! Hannah is a great artist, isn't she?

I tried the link to your namesake but the link took me back to this post.