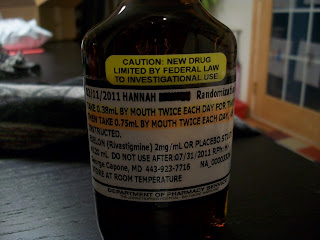 We spent the day at Kennedy Krieger in Baltimore; Hannah taking cognitive and memory tests, while I filled out paperwork and parent surveys. One would think that a few hours of that would put Hannah to sleep. But she came out bouncy and cheerful.

We had a late lunch and then met with Dr. Capone and his research assistant. There was one more questionnaire, and a little review of the study requirements (keeping track of dosing and any side effects or illnesses). I thought they were going to administer the first dose while we were there. The original study paperwork said that Hannah would get the first dose and then she'd be monitored for 4 hours. I was expecting to spend another night in Baltimore! Apparently, some subjects get a bit nauseous as they adjust to the medication (or placebo...). But they lowered the initial dosing level, which has reduced the nausea.  So we start tomorrow morning.

Today's visit was a little dull.  I think I was expecting a little more fanfare or excitement, but they just handed over the bottle and medicine syringes and that was that.

The only really interesting part was when Hannah surprised Dr. Capone with her new facial hair. 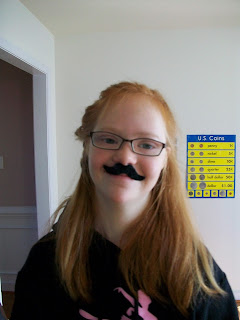 (I think she looks like Rich Uncle Pennybags from Monopoly)

I think this picture is also the debut of her new "teen-like" glasses! She's been updating--hair styles, glasses, shoes/boots.  I can usually influence her choices in clothing if I offer things like, "Would you like to wear this gray t-shirt, or the stylish green one?"  She always goes for the "stylish" choice. Of course, it would be helpful if I could actually be sure I was leading her in the right direction...
~~~~~~~~~~~~~~~~~~~~~~~~~~~~~~~~~~~
To read more about the research study, go here
Invented by Beth at 11:00 PM

I'm so excited to hear all about this trial and your thoughts on it!

Thanks for keeping us in the loop about the trials available to our kiddos. This is great info!

I have a quick question about how you vitamins/herbal supplements. I have a 3.5-y.o. daughter. We were trying to keep her on Folic Acid, Ginko, and B-12, but ran into trouble with not being able to get her to actually take them. We had been grinding them up & putting them into chocolate milk at breakfast. The chocolate was supposed to cover up the funky taste & gritty texture. In the end, she basically quit drinking her milk in the morning. I tried putting them into her yogurt - disaster!

Any help would be great. Thanks!

Love the glasses; they look like mine! She seems to be a stylin' gal, so of course she'd go for the stylish choices!

The moustache is definitely stylish! :)

Which study was this? How has it been going? I love to hear about these. :-)

I love your Uncle Rich Pennybags!!!