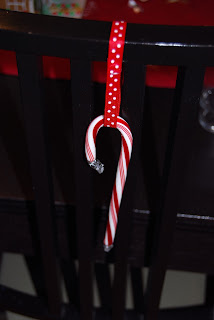 Yep, I always take the month of December off from homeschooling.  We have so many other things to do that we'd go crazy otherwise.  Recitals, parties, fun outings, helping friends, etc.

Last week we spent a night at Great Wolf Lodge in Williamsburg.  They had a homeschool discount, and we had friends who were staying there too.  It was lots of fun.  We picked up Chris and his roommate for the evening and they had fun at the water park.   Hannah and I were a bit wimpy--it was chilly in there!  But we did go down a few waterslides. 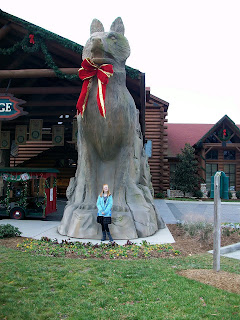 
Here in Virginia we've already had three measurable snowfalls!   And it's not even winter yet! 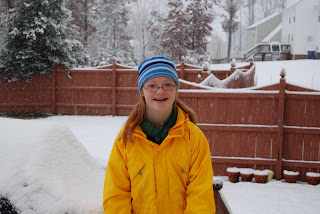 Hannah worked hard on the Gingerbread House.  Mostly by telling me what to do.  But she did do the roof, and added all the candy.  And ate a good portion as well. 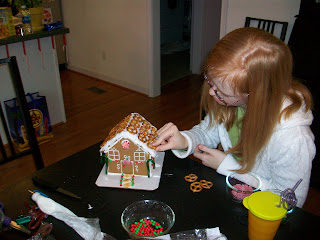 We picked Chris up from school last night.  Tonight we decorated the tree, which was nice.  We have a tall skinny tree this year.   And Hannah wanted to put the angel on top, so she used a step ladder (she's a bit afraid of ladders--she doesn't trust them).  We were proud of her for doing it! 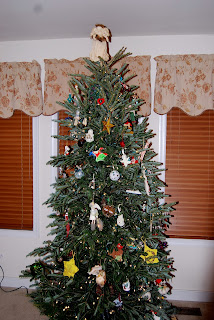 There was just a little bit of time left before bed, so Hannah and Chris had an all-out dirty-sock war. 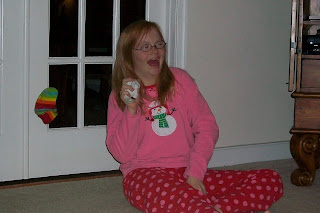 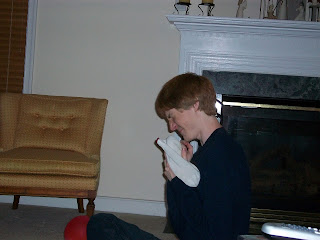 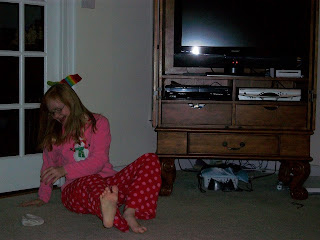 Hope your family is having fun, spending time together, preparing for holidays!

You have a lovely family!

That's a beautiful gingerbread house and I had to laugh at the dirty sock war.

You're smart to take December off. We aren't getting much school done. Merry Christmas!

Beth, have you ever heard of the game "Tiger Tails?" Played with socks, but they don't have to be dirty! It's a favorite here!

I never get tired of seeing Hannah pics. I think she is amazing, and I hope I get to meet your family someday!

All right, Beth, if you're going to leave comments on my blog about being interrogated by the KGB then I'll expect a blog post will be forthcoming soon, right? LOL

Ed and I both cracked up about Wolfgang. So funny!

Wolfgang--love it! We could use some of your snow. I think I have the same pajama pants as Hannah!