When I was eight years old, our family moved.   My Dad had been chaplain at a small Lutheran college in East Orange, NJ, and he took a call to be a pastor at a church in Dunellen, NJ.   Our new house was a parsonage, owned by the church.

The day after the movers unloaded the truck, we were all busily moving boxes from one place to another as we unpacked.  The front door was wide open as we trekked back and forth from car to garage to house.   I vaguely remember being surprised by finding a little girl walking upstairs in our house.   She was short, had straight black hair, cut in a pageboy style.  It was 1972.

This little girl was Jeanne. She lived in the house across the street with her 3 brothers and 1 sister.   She was seven years old.  And she had Down syndrome.

We spent hours and hours playing.  She was thrown into the busy neighborhood games of tag, kickball and Ghost in the Graveyard.  She'd come over to play and I'd teach her how to play Go Fish.  We'd play in the sand box. We'd bake brownies together. She came to all my birthday parties.

We never argued.  No middle school drama with Jeanne.  She was one of my very best-loved friends.

Linda, Jeanne's older sister, was my age.  I remember Linda being proud that Jeanne was in the "Educable" class at her segregated school.  She told me about the differences between "educable" and "trainable".  This was in the early days of public school providing any sort of education for children with cognitive disabilities.

Our neighborhood was amazing. So many children, every one accepted Jeanne--looking out for her, including her in our games, running through the sprinkler, climbing trees...


When Hannah was born, my mother said that all she could think of was the hours and hours I spent teaching and playing with Jeanne.

I remember her shoelace patterned scars on her legs and arms, where surgeons had taken veins or tissue to repair her heart defect when she was a baby.   It brought me great comfort to think about Jeanne when I learned that Hannah would need similar surgery.  Her surgery in 1965 or 1966 must have been much more risky than when Hannah had hers in 2000.

We moved to Pennsylvania when I was 15.  I don't think I saw Jeanne again.   While I didn't see her, I thought of her frequently.  As a teenager, I worked at a day camp for children with disabilities.   I always kept my eyes open for people with Down syndrome.  When I went to college, I considered becoming a Special Ed teacher. (I took a 100 level Education class and lasted about two weeks before I transferred out.  Clearly at age 18 I knew I couldn't follow all the rules that teachers have to learn. Ha!)

I majored in Psychology.  I learned quite a bit of child development, including "abnormal" psychology. I was much more interested in cognitive psychology than clinical or counseling psych.  I also focused on animal behavior--the hows and whys of behavior of wild and domesticated animals, particularly non-human primates.  (This is why at an early age my children learned the easiest way to sort out  monkeys and apes:  apes do not have tails.)

I graduated from college, and followed my heart--giving up the possibility of a position in Puerto Rico studying a tribe of Rhesus monkeys that live on a nearby island.  Instead, I got married, and started a family.

I still held my memories of Jeanne.  I always thought I'd adopt a child with Down syndrome.  James had never had any experience with anybody with a disability--physical or intellectual.   When we decided to add to our family of four, we talked about adopting a child.  In the spring of 1997 we filled out some forms for the state about the kind of child we would accept.  A few weeks later we received a reply saying they had no children that met our criteria at that time.   The very next day I took a pregnancy test.  It was positive.

Fast forward:  Hannah was born.  Six hours later, a doctor suggested that Hannah might have Down syndrome.

How about that?   In retrospect, it's pretty fabulous!

Some of the very best things can start with Facebook.   I reconnected with my childhood friends.  Karen, Kathy, Suzanne, Rosemary....and Linda.   And I got to hear about Jeanne!   She's living in a group home in New Jersey.  Linda is her guardian.

Remember that summer trip to Vermont?  On our return trip south, Hannah and I made a pit stop to see my old neighborhood friends in New Jersey.  Including.... 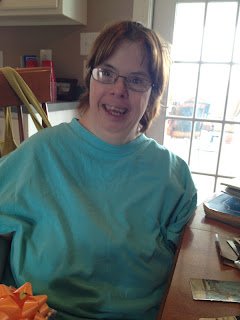 I was amazed.  She has a memory like no other!  Her speech was far better than I ever expected.  She has friends and activities, and she's still hilariously fun!

We spent the afternoon together, with a cookout, swimming in the pool, catching up on 33 years.

Since Linda became Jeanne's guardian, she's been on a sharp learning curve.  It was great to learn from her, and for me to share information too.   I told Jeanne that I was SO GLAD that I knew her.  I am different because she was in my life.  I never once used the word "Retarded" in a derogatory way.  I always respected people who were different from me.   Jeanne changed me.  She made me better. 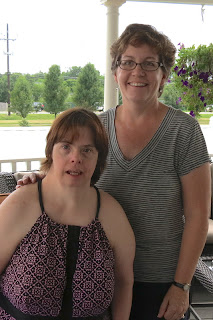 I think that everyone is made better by having interesting, loving, funny, caring, genuine people.   That's some of the best of having a person with Down syndrome in my life.  Lots and lots of people with Down syndrome.

Beautiful! It's amazing to me that because of Jeanne, not only are you a better person, but people who are touched by you and your family (like me!) are better, too. Full circle, indeed.

Wow, what a great circle, and now our kids are the Jeannes of our generation..teaching others and changing their little piece of the world.

Amazing!! How wonderful that you were able to reconnect with your friends, and that Jeanne has been such a blessing to you long before you would even realize it. Awesome, I love, love, love this post!!

What a great story!

What a wonderful post - and I loved the pics too...we are truly blessed aren't we?