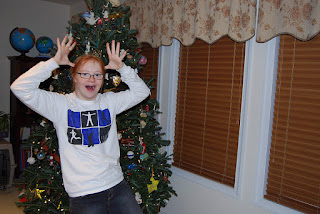 Hoping you and your family has had a blessed Christmas!  We've been having fun, with all of us together.  There's nothing like having all three offspring boisterously singing in the back seat of the car on the way home from church! 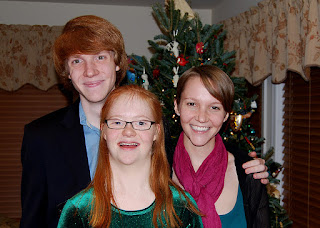 One of our traditions is that the kids get to open a gift from another sibling on the 23rd and 24th.  This lets them focus on their brother or sister instead of the exuberance of Christmas morning.    This year Chris chose to give Hannah a Lego Fire Truck set. A perfect match.  Chris is a mastermind Lego builder, having a good 15-16 years of Lego engineering.  Hannah is slightly obsessed about becoming a Firefighter when she grows up.

Hannah has played with Legos, but mostly free-form buildings and space ships.   There is a lot of fine motor skill required to build a set, and quite a bit of attention to follow the directions.  Chris did an outstanding job of mentoring her through the construction--just enough help so that she didn't get frustrated, but supporting and encouraging her as she wandered through the pile of 200+ tiny pieces. 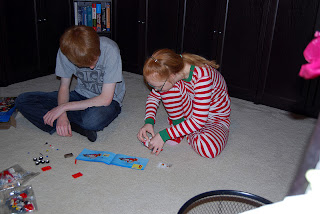 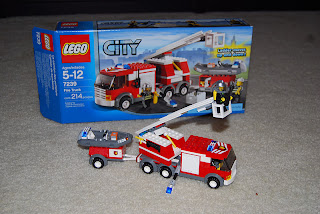 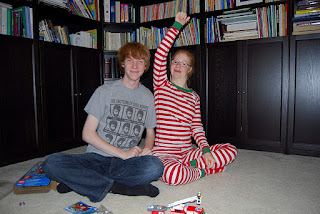 I know that Hannah would not have tolerated my help if Chris wasn't there (it's that teenager-independent-from-mom-thing).  Thank goodness for siblings!

Hannah had her Christmas piano recital this evening.  She did a great job, but the lighting was so low the video didn't come out very well, so I'm sharing this morning's practice.  Yes, she is wearing Ugg boots with her bathrobe (at least she's cozy!).  It reminded me of when Kate was young.  She'd go to harp rehearsals in short-shorts and cowboy boots!

Make a video - it's fun, easy and free!
www.onetruemedia.com

Kate's HOME!   She's been home for more than a week, but we've been so busy we've hardly been around!

She landed in Richmond around 12:15 a.m.  Exhausted, of course, after 27+ hours of traveling and no sleep.   We forced a nap on Hannah earlier in the evening, so she was mostly functional for the airport. 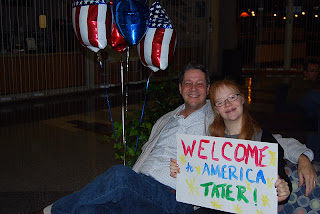 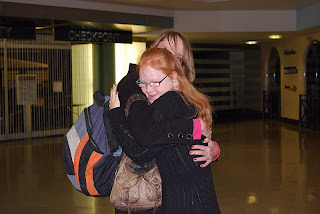 Another grand welcome from Hazel! 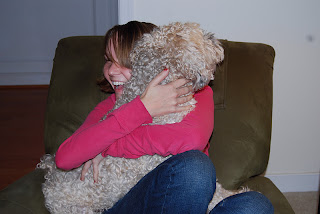 So far so good! We took a quick jaunt to North and South Carolinas to see grandparents and friends who were eager to see Kate.  This week has been kind of crazy since we're updating our kitchen and everything is askew.  We finally got our Christmas tree--but it's not in the house yet...

Chris comes home next week, so we'll have a full house.

For a finale, here's a short Hannah-in-action video for your viewing pleasure!  Slightly back in time, from farming and Thanksgiving.

Make a video - it's fun, easy and free!
www.onetruemedia.com

Hi everyone!  This is Kate.

I'm finishing up here in Jordan and will be returning home on Monday after 774 challenging, exciting, happy, sad, Arabic-filled, lonely, fulfilling days in the Peace Corps.  It's so hard to describe what this experience has meant to me--I know it's changed my life.  And I know it wouldn't have happened were it not for my mom and Hannah.

After Hannah was born, as I was growing up, I knew I wanted to do something related to children with disabilities, especially Down syndrome.  My junior year of college, I thought I might become a speech therapist, and visited graduate schools in that field.  I also considered becoming a lawyer specializing in adoption--specifically of children with disabilities from other countries (a la Reece's Rainbow).  That was also the year my mom suggested the Peace Corps.  I knew from the moment I started the application that I would be accepted.  I was invited to become a special education teacher in Jordan, a small country in the Middle East.

In the beginning, I lived in a small Bedouin village for training.  We had intensive Arabic classes every day, coupled with technical (special education) trainings.  We also had a practicum in the special education center in my host village.

After two months, I moved to my permanent site, in another small village.  These people were farmers, not Bedouin, and my village was filled with greenery instead of desert.

Above all, the thing I love and will miss most from my Peace Corps service are the people.  My neighbors, my friends, and especially my students.  I learned Jordanian sign language to communicate with my neighbors and students.

My special education center consisted of 20-30 students from the ages of 5 to 21.  My students were deaf and blind, and had Down syndrome, learning disabilities, autism, paraplegia, dwarfism, ADHD, congenital defects, psychological and behavior problems, and muscular dystrophy.  My experience teaching at the center gave me experience with all types of disabilities, but the most important thing it taught me was that society is one of the largest factors in how much a person with a disability can achieve.

For instance, my student Mohammad Jamal is in a wheelchair.  The story his mother told us was that she fell down while pregnant, harming baby Mohammad in utero, and that's why he is paralyzed.  He is cognitively normal, but attends a special education center because the students at a typical school would be too cruel to him.
This type of pseudo-explanation is common in Jordan.  Families don't want people knowing about their children with disabilities, or if people must know, they invent something that happened to the child, rather than accepting it as genetics or God's will.  This is so that their other children can eventually get married--no one wants to marry a woman with "bad blood," despite the fact that most people in Jordan marry their cousins, just as their ancestors have for centuries.  The whole culture supports the segregation of people with disabilities, not even attempting to "mainstream" them as we do in America.  Add to that fact that the two jobs available to people who fail the end-of-high-school exams are the military or becoming a special education teacher, and you get a recipe for failure.

Children with disabilities in Jordan do not excel because they are not given the tools to do so.  They are not accepted into society.  They are not given proper teachers or care.  Many are not allowed out of the house.  They are marginalized in every way.  We often see stories in the media about the oppression of women in Islamic societies; this is nothing compared to what people with disabilities face.  The Jordanian government is, on paper, extremely progressive when it comes to people with disabilities.  The problem is, there's no trickle-down effect.  Decisions made at the top level by the Higher Council for the Affairs of People with Disabilities are rarely, or if they are, slowly, effected on the ground level, especially in villages.

I have a student with Down syndrome who is around five years old.  For the first week he attended our center, no one bothered to find out his name.  We called him welad, which means boy.  His name turned out to be Isma'il (Ishmael), and he's one of my favorite kids.

See what I mean?  Nothing is expected of people with disabilities in Jordan here--not even names.  Living here for over two years has given me such an appreciation for America--how we give our children pride, expectations, and hope.  I have always known my sister is exceptional.  I never knew before how much our culture and our family has encouraged that.

Living in Jordan, I've gained ten pounds, learned Arabic, played 4,434 games of solitaire on my computer, and read over 200 books.  I've also formed countless relationships with the people around me, and I hope that my influence has helped open their minds a little.  I've tried to explain that people with disabilities can succeed, can speak, read, write, work, and marry.  I know Hannah is capable of all those things and more.  I wish the Jordanian culture and people were more accepting of people who are "different," and I know that in time someone will prove them wrong.

I set out to write this blog post as an overview of my Peace Corps service.  Instead I seem to have gone on a rant about Jordanian culture.  I don't mean to offend anyone or disparage anything--I'm all about cultural relativism.  However, I think this topic is extremely important, and I hope that this will inspire people in America (and Jordan, if they read this) to encourage their daughters, sons, sisters, brothers, and friends with disabilities to achieve everything they are able to--which is certainly more than we expect of them.