Yes, I REALLY will get the tongue/jaw post up.  I've just arranged for a little helper to be my guest so we'll have someone really cute to exemplify some methods of improving jaw strength and other oral placement techniques.   I meet with this little cherub on Tuesday, so hopefully I'll get the post up soon thereafter.

In the meantime I'm tired of holding off regular posts in the hopes that I'd get my OPT homework done, so I've got lots to say.   If only I could remember what it was...

Aha!  Thank you, memory banks!  One topic was Self-Talk.   I've touched on this before, but recently I've had several moms contact me (local friends and online readers) who have been very concerned about their child talking to himself.   There is a great Disability Solutions article on Self Talk.   I love me some Disability Solutions.  There is a great one on sexuality as well--which I encourage you to read, even if you've got a youngster--it really isn't scary, and it's important that you have a bit of a road map in your head.   Disability Solutions used to be a free printed publication--very very nicely done.  But now it's all online, which is great, but I miss having it to hold in my hand and review over and over again.  Tons of information and ideas in those issues, all archived now here.

But back to self-talk.  In the Down syndrome population it's very common for individuals to spend time talking and talking to themselves.  It's not a sign of mental illnesss.  It's not exactly "invisible friends" talk either.  As preschoolers, my typically developing kids had invisible friends.  And they were "real" friends--at least, to them--they were invented and well loved.  Hannah didn't have this stage when she was younger.

But she definitely talks to "characters" now.  She doesn't make up her friends.  She usually uses TV animated characters.  She only does it when she's alone (or thinks she's alone).  She knows that it's not socially appropriate to talk to herself (or Scooby Doo and the Gang) when others are around.    It seems to be a way of processing and practicing language.  Her latest big thing was her discovery of Rescue Heroes.  Remember back a decade ago?  There was a TV show (and a well-marketed toy line) about Rescue Heroes who responded to emergencies around the world (Global Response Team!!!).   Yes, Hannah has an affinity for the 80s and 90s--from sappy children's singers to extremely outdated TV shows.  We view it as another challenge to overcome at some point in her life. (Ha!) 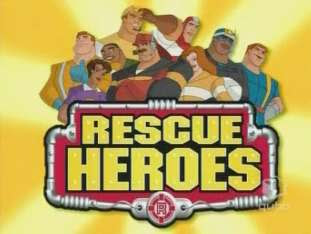 So lately, we overhear heated discussions between "Hannah" and Billy Blazes and Wendy Waters (both are firefighters), Jake Justice (policeman) and Ariel Flyer (a pilot).  I can interrupt her and she'll easily transition to answer me.  It's not like she's in another world.  She's mostly just playing.  Playing with language, and processing ideas and conversational skills.

I usually can't tell to "whom" she is speaking--which character she's chosen for a particular discussion.  Usually the "conversations" aren't about rescuing anybody (if it's the Heroes who are chosen one day), or about solving The Mystery (if it's Scooby Doo), or singing (it it's the Wiggles, which thankfully have disappeared).  She usually has very formal and polite conversations when she self-talks.   Here's an average "conversation", Hannah is in red, the other "speakers" are unknown to me unless she uses their names.

"What do you think about that??"
"Why, Hannah, I think that's a wonderful idea!   Let's do it now."
"But don't forget that we should go upstairs first to get the blanket we need."
"Oh, yes, we need to get the blanket.  Then we can use it for the roof"  (sofa cushion fort)
"That's good thinking Hannah."

She uses a different tone of voice when she is self-talking.  It's a little playful, but still formal, and always complimentary.   I don't know what she is processing--I don't know why she does it, since it's not like she's wrestling with big ideas and concepts.   It's more like she's practicing.   Or, she's just playing.  And it makes her happy.

Sometimes I wonder if it's because she's lonely.  She'll tell me if she's lonely. She's happy to play with her friends.  And she can keep herself entertained when she's alone with art and toys.

Self-talk is definitely entertaining.  We catch some of her best phrases and ridiculous ideas when she's self-talking.  If I don't write them down immediately I forget.

Overheard last week while she was climbing the stairs:
"Hey, umm,  Hannah?  Wedgie."
"Oh, thanks for the tip."

Self-talk is not a bad thing, and it's nothing to be worried about.   If you're unable to interrupt the self-talk, and you really think that your child is "hearing voices", rather than "playing" voices, then you need to investigate further.
Invented by Beth at 9:00 AM

Gabe is now five, and he is re-enacting a few of his favorite The Mean Kitty videos on YouTube. I think this is Gabe's prelude to self-talk.

For instance, one part he re-enacts is stopping in one spot suddenly, hands on hips, and naming off the items in a room.

We call this "taking inventory" -- (which really helps when making our grocery lists, actually!). But he is actually mimicking the guy that stars in and makes the videos Gabe loves to watch.

I have to admit that I'm a self talker. It isn't unusual for me to talk myself through a new task especially.

Anyway, this is a great post! And thanks for the links too!

Hope you had a wonderful Mother's Day, Beth!