Dashing through the house....

Wow, the days are speeding by so quickly! Our gingerbread house stands undecorated as if construction was halted due to an economic down-turn! It is completely naked, and quite lonely. 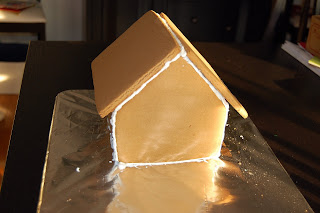 There is so much to do, that likely won't get done. Surprisingly I'm not too stressed by it. We've been having fun spending time together, and even if it isn't our traditional 200 cut-out fancy decorated sugar cookies, we're still having a good time! 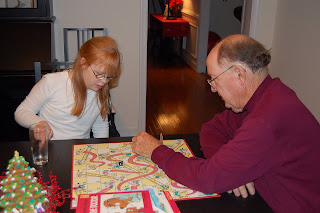 My parents were here over the weekend. They usually make the trip up from South Carolina, stopping at our house first, then heading to see my brother and his family in Philadelphia for Christmas, then on to my sister's house in NYC, then back here for New Year's on their way back home. They came a little early so they could catch Hannah's piano recital.

Hannah did very well at the recital (and, for my first piano recital, I did pretty well too!). We all were a bit worried about what would happen, since Hannah had a shut-down at the piano earlier that day. She has done this before, but just during regular practicing. I don't know how to explain it thoroughly, and I can't tell if it's just stubbornness or if she really "freezes". She was ready to have a "practice" recital, and James and I sat on the sofa as the "audience". She walked up to the piano, did her little bow, sat down, got her hands in position, and then didn't play. For many minutes. We gave her some time, then encouraged, then inquired, then pleaded, then grumbled. She just sat there, having some kind of internal conversation with herself. She completely refused to play anything. I know she was listening to us, so she wasn't really "shut down", but she apparently could not get herself together to even play a single note. I told her to "play one note, any note" and she would not do it. It was SO frustrating! This was only 20 minutes before we were scheduled to leave for the recital. I really can't figure out if she was just being stubborn (a good possibility) or if she was just stuck. She seemed to be enjoying herself, her power, over us. It's true, you can lead a kid to a piano, but you can't make her play it. (Has anyone else experienced this with a kid with Ds? I'd love input.)

So I ended up yelling at her (good mom that I am). I sent her up to her room, and followed quickly behind her. After a few sharp words, I helped her get dressed into her beautiful holiday dress (picture coming after Christmas Eve...I didn't get a good one at the recital). We came downstairs, took a deep breath, and tried again. Success!

We all breathed a sigh of relief when she confidently walked up to the piano, sat down and played her best. She played Away in a Manger, and our duet was O Come All Ye Faithful. Since she's the only student with special needs in the studio, she has quite a few fans. Nobody yelled out "Brava!", but it was clear the audience was appreciative of her hard work. She loves being "on stage". 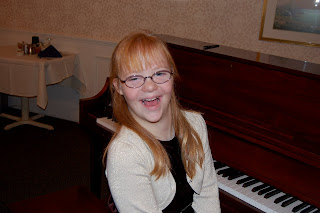 We also did a Thanksgiving Sequel. Kate has not made it home for Thanksgiving for the past 4 years, so we did it again. 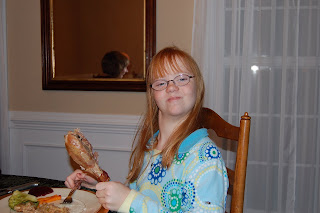 It was quickly followed by Christmas (by a matter of a few minutes!). 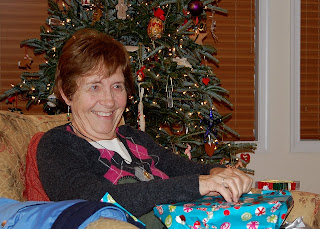 My mom and I gave each other the exact same thing! 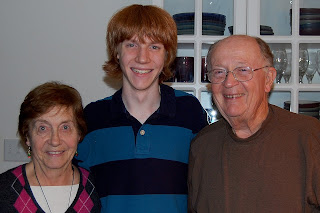 Parents are off to Philadelphia, and we *might* decorate the gingerbread house! Or it might wait and become a Valentine's house.
Invented by Beth at 7:54 AM