Guess what? Hannah has pronated feet. Gee, I think I learned that about nine years ago! This afternoon we saw our new Pediatric Orthopedist. He reviewed her x-rays of her hips, as there was some concern about subluxation. He said her hips looked great, and since she no longer has the hip pain she had over the summer, we don't have any symptoms that require further inquiry. 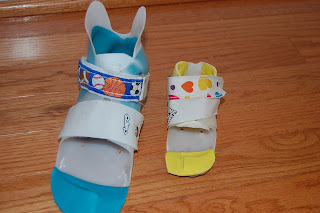 Hannah got her first pair of AFOs (ankle-foot orthotics) when she was about 18 months old. She would wear them on a half-time basis, so she had time to make her foot muscles work when she was free from the orthotics. They are sort of like light weight ski boots, keeping the foot immobile, but giving the support needed to keep arches in place. Last year, we tried some inserts instead, so Hannah could be more independent with shoes. These stay in her sneakers, so there isn't the extra work of strapping on the orthotics and then getting shoes on over the top of them. Hannah was independent, but I have seen her gait deteriorate a bit over the past year. She's outgrown the inserts anyhow. 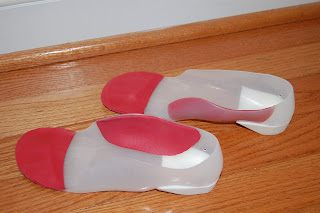 So the new doctor wants her to try a different kind of insert, which some local guy can create in his shop. If those don't work, then we have a script for more AFOs.
At least she'll still be able to get her shoes on independently with the inserts which makes it more likely that she'll wear them. It's not easy getting orthotics on correctly, and then wedging them into sneakers is difficult even for moms and dads (though I think I have the edge over James...just because I get more practice).
Invented by Beth at 3:45 PM

Thanks for visiting my blog! You have a beautiful family...and I loved the cat in the hat costume!

I saw on a post down below that your husband is a Naval grad? My hubby is in the Air Force and both of our fathers are retired Air Force!

We've been advised by NACD to shave 1/8" off the outer part of Whitney's shoes and boots once she out grows the inserts we bought for her feet to support her arches. NACD says we won't need to use the inserts because by filing down the outside of the shoe/boot to create a wedge it helps her to strenghten her feet naturally. What do you think ? Is that similar to what you did for Hannah ?